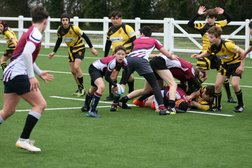 On Maundy Thursday the Shelford U13 and U14 players and their parents waited anxiously for the arrival of the RBW tour bus bringing the players from rugby clubs across Baden-Württemberg to the 19th Shelford-RBW exchange. The exchange takes place as part of the Cambridge-Heidelberg Partnership and after their long journey, of over 12 hours in the coach, the 39 RBW players were quickly introduced to their guest families before being whisked into the city for a reception hosted by the Mayor, Councillor Pippas.

After the warm welcome by the Mayor, alongside other groups taking part in the Easter exchange, the RBW players returned home with their host families for some well-earned sleep.

The first day In Shelford started with some joint training with the Shelford 1st XV. Both the RBW and Shelford youth players really appreciated the session and had a chance to get to know each other a bit better.

As there were no rugby matches within reach over the weekend, the afternoon was spent at the Abbey Stadium cheering on the U’s in their match against Crawley Town. The RBW tour kit was a good match for the U’s home colours and we got to meet some of the U’s players before the match.

On Saturday the rugby started in earnest with matches of Shelford vs RBW for both the U13s and U14s. The German sides showed some excellent defensive skills and played some great rugby but the home advantage eventually led to wins for both Shelford squads.

After a hearty match tea for players and spectators, the afternoon was spent doing various activities with their host families while the coaches met to discuss international rugby strategy over a few refreshments in the Blue Ball in Granchester. It was here that a fiendish plan was hatched that was put in play at 11am the following morning.

As the players and parents turned up at Shelford for their second day of matches, we had to tell them that we had realised that we had played too much rugby within our allotted time period and we would have to postpone the matches to Monday as this was the start of a new week. So as no to waste the day we had decided that the players would wash all of the parents’ cars in the car park. The simultaneous translation into German meant that the groans from all the players reached us at the same time. The players were extremely disappointed and so we had to ask them if anyone knew what the date was. It seems both English and German players fell equally for the April Fool but all soon cheered up when they realised they would be able to play rugby after all.

Sundays games were superb with some really tough rugby played by both age groups and excellent skills shown by both sides. The Shelford U14s were joined by Biggleswade players and put out a barbarians side as well as a Shelford side. Every single player from all three clubs showed their best and it was a joy to watch the matches. All coaches were extremely proud of the performance of their players.

The days matches were followed with a BBQ for all the players and supporters and some games – the most popular of which was Zorb-ball. Some very tired players then went home to their host families for some well earned rest.

Monday was spent visiting the City. Luckily the rain held off for most of the day allowing some sightseeing and souvenir shopping before we all met for a final meal at Shelford Rugby Club to celebrate what has been a fantastic weekend not just of sport but of building strong friendships.

We would like to thank Cambridge City and the Cambridge-Heidelberg Partnership for a very warm reception to kick off the Exchange Weekend and the RBW Coaches and Team Admins for organising the trip to Shelford and bringing a great group of youth rugby talent with them. We would especially like to thank the Shelford RC parents for hosting the visiting players and supporting us over the weekend – our visitors all commented on the friendly, welcoming atmosphere that you created – just what youth rugby should be about.

Here’s looking forward to a fantastic 20th anniversary exchange next year in Heidelberg!