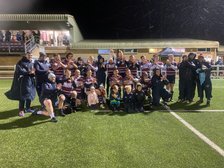 Last Gasp Tang to the Rescue

Shelford extended their unbeaten home run against league leaders Sudbury, with a try by Louie Tang from the very last play of the game. It’s fair to say Shelford have left things a little late in a lot of their home games this season, but nothing as late as this! Shelford were staring at their first home defeat of the season to very well-drilled Sudbury outfit who looked sharper in most facets of the game.

The Peacocks would have had to take a home loss on the chin for the first time this season and we could not have begrudged Sudbury the win……. however, Shelford never gave up on the prospect of getting something from the game, in fact they could have won it with a successful touchline conversion by TJ, but that would have been mightily harsh on Sudbury if that had been the case.

Yet again, the home support was immense, making so much noise that they proved to be a ‘9th man’ in the last scrum of the game, where the Shelford Pack put in a huge effort to gain possession from Sudbury’s own put-in. Shelford’s forwards then went forward with the ball, but Sudbury were pinged at the breakdown for not rolling away.

A quick-tap penalty by MoM Charlie Baker caught the Sudbury defence on their heels as he darted his way through a number of defenders before shifting the ball onto Louie Tang. Tang cut inside the covering defence to dive over for the equalising score, sending the Davey Field crowd into raptures. Shelford’s unbeaten home record for this season stayed intact, just!

The game was blighted by the arrival of Storm Arwen, which made for an extremely cold, wet & windy day for all, and also put paid to seeing any real running rugby by two very exciting and capable looking backlines.

Sudbury looked to be the more cohesive of the two sides, putting more phases together and on occasions getting in behind the Shelford defence. A Sudbury penalty was tapped quickly close to our line, but good defence forced a knock-on to snuff out the opportunity.

The resulting 5 metre scrum for Shelford was somehow ‘won’ by Sudbury and with our defence on our heels they moved the ball quickly through hands to dot down in the corner through Austin Beckett. Chris Lewis slotted the extras through a superb touchline conversion to give Sudbury a 0-7 lead.

Shelford responded immediately as Jack Biard crashed over the whitewash following a series of Shelford ‘pick & goes’ on the Sudbury line following an attacking lineout. Cracknell’s conversion bounced off the upright to deny parity, 5-7 to Sudbury after 12 minutes.

Sudbury centre Cameron Ritchie then sees yellow for back-chatting to the referee, but during that 10-minute period Shelford could not capitalise on the numerical advantage, in fact they end up a further 3 points back as Chris Lewis slots a long-range penalty for a 5-10 Sudbury lead.

Shelford coughed up too many promising situations with a series of lineouts that went awry, putting paid to any opportunities of eating into Sudbury’s lead. Half-time arrives with a 5-10 lead for the visitors.

Sudbury started the 2nd half well and very quickly extend their lead through another well struck penalty by Chris Lewis, 5-13 to Sudbury.

Shelford again responded well, and it was our Talisman Charlie Baker who sparked the reply with another ‘tap & go’ penalty which then caught Sudbury out by not being the mandatory 10 metres. This was a kickable penalty which Lewis Cracknell duly dispatched, 8-13 on 60 minutes.

Sudbury then managed the game really well, with fly half Chris Lewis putting in some difficult ‘high bombs’ for our back 3 to deal with. This forced a couple of knock-ons to give Sudbury good field advantage, attack our line from attacking scrums and close out the game.

Chris Lewis was again at the forefront of these attacks, but in the act of being tackled, he fell awkwardly and damaged his knee quite badly, halting the game for a few minutes while Lewis was attended to. We believe he sustained an MCL injury, so we wish him well in his recovery.

The teams returned to finish off the remaining 8 minutes of the game, and with it that ‘grandstand’ finish!

Both teams will surely be contenders for the three promotion spots on offer, so only time will tell how valuable those extra points we’ve gained (and denied Sudbury) will be towards the end of the season.

Shelford have their final away game of 2021 this Saturday at Amersham & Chiltern, before two home games against Leighton Buzzard and Norwich complete the year.