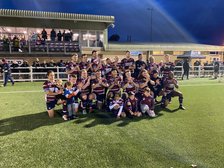 Shelford extended their home winning run for the season to 5 games with yet another close fought victory, which had their supporters on the edge of their seats until the final whistle.

The atmosphere at the Davey Field was probably one of the best we’ve experienced, with yet another sell-out lunch having been consumed, the vociferous crowd really did get behind their team, and how they were needed late on!

Eton Manor are clearly a team that back themselves with ball in hand, from anywhere on the pitch it would seem, so late in the game the Peacocks really did need to be on their mettle to preserve their lead and keep Manor at bay from taking the victory.

However, if Shelford had cashed in on the opportunities they’d created, particularly in the first half, then Manor would never have been sniffing even a whiff of victory late in the game.

For the first 15 minutes or so it was all Shelford, with the forwards carrying hard and creating space in the process. The Peacocks got in behind the Manor defence on a number of occasions, but either the final pass didn’t stick, or the ball carrier lacked support. Ben Bates went on some charging runs, as did Dan Barber as well as the usual mazy runs from winger Louie Tang, but Manor’s defence stood firm.

Manor’s defence were then pinged for being offside, but Cracknell’s penalty attempt went wide. Manor then started to feel their way into the game and isolated a Shelford ball carrier to win the penalty, which was slotted successfully by Cameron Dutch. Shelford found themselves inexplicably 0-3 down having had the majority of territory and possession.

Shelford responded well and quickly moved the ball wide from an attacking ruck. Jack Biard hit the line at pace from a Cracknell pass to find a hole in the Manor defence to score his 5th try of the season. Cracknell converted the try to give Shelford a 7-3 lead, 20 minutes in.

Shelford extended their lead further through Matt Gregerson, as he latched onto a flat pass from Charlie Baker to crash over the line, converted by Cracknell for a 14-3 lead after 32 minutes.

Late in the half, Shelford tried to work the ball on a set-play, but Manor’s Jake Kane was alert to the situation and latched onto the interception and ran in under the posts, converted by Dutch for a 14-10 HT score line. For all of Shelford’s dominance, the HT score line did not reflect this.

Shelford continued in the ascendancy in the 2nd half and quickly built on their lead from a catch & drive at the lineout, which saw hooker Miles Huppatz crash over from the back of the maul for a 19-10 lead after 43 minutes.

The Peacocks then went in search of their 4th and BP try, but from a promising position close to the Manor try line, the ball was knocked on. From the scrum on their own 5 metre line, Manor decided to run the ball and very quickly got in behind the Shelford defence. Good support play saw them eventually get the ball into the hands of centre Scott Smith, who crashed over in the corner for a fine try, 19-15, giving Manor the incentive that this game was potentially there to be won.

Manor, for the final 20 minutes started to play with a great deal of confidence, running from deep at any opportunity and they really did cause some issues for the Shelford defence, but we stood firm as we started to win a few turnovers and clear the ball to relieve the pressure.

With only a matter of seconds on the clock, Manor were still coming hard at the Shelford try line, but a penalty for holding on against Manor meant we were able yet again to clear our lines and see out a hard-fought victory 19-15. The cries of ‘Shelford, Shelford’ from our loud & proud support were rewarded!

This was a hard-fought win between two evenly matched sides intent on pushing hard for promotion this season. Well played to both sides.