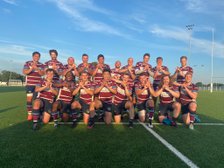 Shelford’s winning start to the season continued with an impressive win at the extremely smart new home of Colchester, Raven Park. Another BP win now sees the Peacocks topping the league by one point from Eton Manor, the only other unbeaten team in the league.

Shelford’s preparation for the day was disrupted by the early dropout of 2nd rower Jordan Freer, so Oli Holmes was promoted from the bench for his first start for the club after benching last week. Harry Rogerson was then called up from the Nomads.

The kick-off was then delayed an hour as the referee's journey from Kent was disrupted by queuing petrol hunters on the A12. During the warm-up it was clear that back-rower Pete Clark was struggling with a sore back, so Rogerson was then promoted from the bench.

Frantic phone calls were then made to Warrick Anderson, who was travelling over to watch the game anyway, to make sure he had his boots with him! As always ‘Wozza’ didn’t let us down and made it just in time for the 4.00pm kick-off!

Shelford started much the stronger, setting a good platform to attack from. Their depth and pace created by that depth was clearly evident from the early exchanges, and Colchester were penalised for taking a runner out off the ball. Cracknell’s long-range penalty rattled the upright for the 2nd week in succession.

Shelford were still in the ascendancy and finally broke through after Charlie Baker went quickly from a free kick to set up a series of pick & goes for the forwards close to the Colchester line before Miles Huppatz crashed his way over, converted by Cracknell, 7-0 after 15 minutes.

Shelford’s defence has become a mightily impressive feature this season, and this continued where it left off against Harpenden, continually knocking back their opponents in the tackle and forcing many knock-ons in the process. Their mean defence has now only conceded 5 tries in the 4 games to date, most of those when we’ve been a man down in the sinbin.

Shelford then had good field position from an attacking scrum, and this was used brilliantly for winger Louie Tang to angle in on a dynamic run to make a clean break through the Colchester defence and dot down under the posts. Tang’s pace and footwork is a sight to behold when he’s in full flow! Converted by Cracknell, 14-0 on 26 minutes.

Oli Holmes then wins Shelford a penalty for the Colchester ball-carrier not releasing, and this gave the opportunity for Cracknell to extend our lead further with a confident penalty from the 10-metre line, 17-0 on 30 minutes.

For the remainder of the half Shelford lost their way a little and this allowed Colchester to get a foothold in the game. The Peacocks started to give away some needless penalties, and this gave Colchester the territory & possession to use their weighty pack to good intent. A penalty kick to the corner for Colchester was driven forward from a catch & drive, and Doug Finlayson saw yellow for collapsing the maul.

Colchester opted for the scrum from the penalty award, and with a weakened Shelford pack, Colchester forced their way over through prop James Mitchell, converted by James Crozier, 17-7 at half-time.

Shelford started the second period with Doug still in the bin, as Colchester continued to use their main weapon of the scrum and driving maul to bring themselves more into the game. Shelford conceded a further penalty to allow James Crozier the opportunity to slot the penalty kick and bring the game to within one score at 17-10.

Shelford needed to get out of the arm-wrestle they found themselves in and use their superiority in fitness and pace out wide to create some opportunities. Dan Barber went on a couple of barnstorming runs to set-up some great field opportunities, the second run was converted as the ball was recycled from the breakdown and moved wide to Louie Tang who found himself in space to run round under the posts, converted by Cracknell, 24-10.

The 4th and BP score was a sight to see, as No.8 Michael Dunnett nudged a superb grubber kick in behind the Colchester defence. The kick allowed debutant Callum Traynor to get on the scoresheet as he outpaced the Colchester defence to claim the ball and touch down in the corner. No doubt ‘Dash’ will be talking us through his grubber kick for the rest of the season! Traynor, a recent acquisition from our neighbours Cambridge had a fine game and was a constant threat all day. 31-10 with 15 minutes to go.

The 4th try also brought the travelling Peacock fans to life as their noise levels rose from seeing such a sublime try. One of those spectators was Dunnett’s father Dave, who I’m sure would say he taught him all he knows!

Shelford completed their victory with TJ dummying his way to the line from centre and cap another fine performance. 4 games in and TJ looks completely at home within the Shelford set-up! Cracknell converted to 38-10 lead.

Harry Rogerson then received a yellow card for clearing out dangerously at the breakdown, but Colchester reacted to this and a punch to Rogerson by Brett Cutbush saw him receive a red card for his actions.

Colchester finished the game strongly and put together their best continual phases of the game as they tested our defence out. The finally breached the Peacock defence on the final whistle through Alex Birman, converted by James Crozier for the final score to read 38-17.

Shelford’s confidence would have grown hugely against a side that also have their sights on promotion. Our defence was yet again very hard to breakdown and extremely well ‘connected’. Our attack looked sharp and fast as we looked to bring our back 3 more into the game.

Shelford will be looking to eliminate the ‘lull’ we had in the middle part of the game, which allowed Colchester back into the match. There were however many positives from this game to take into midweek training and onto next Saturday’s home match v Thurrock before we head into a weekend break.

Next week sees a home game for the Nomads too, as they host Southend 2’s in the Essex Merit League.