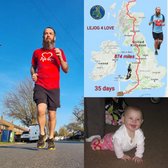 Running for my niece

Fundraising for the British Heart Foundation

A Cambridge man is planning a month-long running challenge to raise funds for the British Heart Foundation in memory of his niece who was given 24-hours to live.

Stephen Hider, 39, is aiming to run 25-miles every day for 35-days. He has set himself the goal to remember his niece, Isla-Rose, who died in December 2009 when she was just nine months old.

When Isla-Rose was born, she was diagnosed with dilated cardiomyopathy – a disease of the heart muscle which means the heart cannot properly pump blood to the rest of the body. Doctors gave her just 24-hours to live, but Isla-Rose defied the odds and lived for 269 days.

Stephen said: “When Isla was born it soon became clear how poorly she was. The doctors were not very hopeful that she would live more than a day. Isla had other ideas though.

“She was real warrior and kept proving the doctors wrong. Unfortunately, her fight came to end sooner than we would have wanted. But Isla gave us 269 amazing days and memories that will live with us forever.”

Since their loss, the family have been supporters of the BHF. Stephen, along with nine other friends and family members, took part in a 10k to support the charity’s research, and in 2011 he ran the London Marathon to raise further funds.

For his latest challenge, for the father-of-four will be running the equivalent of a marathon every day for over a month. Stephen, who works as a bin man, is trying to run a total of 874-miles, the same distance as Land’s End to John O’Groats. He will begin his challenge on the 28 March and expects to complete it on the 30th April.

Stephen said: “I thought I’d do something big to raise money and awareness for an amazing charity. Trying to run the length of the country by doing a marathon every day seemed like an appropriately crazy challenge.

“I will still be working while I’m doing all the running, so it’s going to be very tough as I’m already doing quite a physical job. I think there are going to be some days when I will really have to drag myself out the house, but I don’t like to be defeated.

“I will also be telling myself that it’s just a small challenge compared to the hurdles that my beautiful niece overcame. She taught me so much in her time here and completing this challenge will only be like walking a day in her shoes.”

Gary Atyes, Fundraising Manager for the BHF, said: “I have nothing but admiration for Stephen in setting himself this gruelling challenge to support our research.

“Over the past six decades, we have supported breakthroughs that have helped to halve the number of people who die each year from heart and circulatory diseases.

“However, there is still so much more to do. That’s why the support from Stephen is so crucial as it will enable us to fund scientists who looking for the next life-saving discovery.”

Stephen started his challenge on the 28th March at the new stadium being built for Cambridge City FC in Sawston, and will end his journey at the Abbey Stadium in front of roughly 7k people when Cambridge United FC play their last match of the season versus Cheltenham Town.

He has also been invited to run to/from several other sports clubs and British Heart Foundation shops in the area during the 35 days. It will be the club's honour to host Stephen's daily run on the 9th April when he will be starting from the Davey Field before the Men's 1st XV fixture vs Leighton Buzzard and he'll finish at half time before joining the players for their post match meal.
All members are invited to join Stephen on his run that day, which will see him set off at around 12.45 from the club.

His blog can be seen here: https://www.facebook.com/Lejog4Love and click here for his Just Giving page to make a donation: https://www.justgiving.com/fundraising/Stephen-hider1