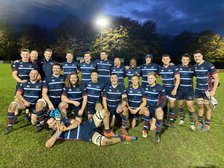 Shelford’s late arrival at Warner’s Bridge resulted in a curtailed warm-up of only 15 minutes, which then materialised in an extremely lethargic opening 20 minutes, which is not the ideal start against a fired-up Southend Saxons.

Shelford soon found themselves a try down after good and patient phase play by Southend which sent Saxon’s centre Tom Ramsey through a stretched defence out wide, 5-0. Ramsey then slotted the conversion and followed this up with 2 penalties which stretched their lead to 13-0 after 15 minutes, an opening to the game which barely saw us leave our own half.

Visions of another ‘Brentwood’ came to mind, but any fears of that type of performance reappearing were soon allayed.

The introduction of Charlie Baker from the bench saw Shelford then start to build themselves back into the contest. Baker’s late arrival meant a shift in personnel to the starting team in the back line with Gillick at scrum half, Chiwanga at full back and a first start for the club for Will Tyrell on the wing.

Shelford started to dominate territory and possession during the 2nd quarter of the game, and then our response on the scoreboard was sparked by a fine counterattack by Mike Gillick. Gillick, now back in his usual position of full back, ran back a Saxon’s clearance kick to find Louie Tang in support, which Tang shipped onto Jack Biard to see him run in under the posts, converted by Lewis Cracknell, 13-7 on 23 minutes.

Late in the half, Shelford were awarded a kickable penalty, but with confidence growing, kicked the ball to touch for an attacking lineout. Although our lineout didn’t function too well on the day, in this instance it did and resulted in an epic 20 metre catch & drive all the way to the try line.

Unsure as to which forward dotted the ball down, we were told it was that ‘big ball carrying’ scrum half of ours Charlie Baker! Cracknell nudged over a fine touchline conversion for Shelford to wrestle the HT lead from Saxons 13-14.

Shelford then started the 2nd half brightly and were awarded a penalty for a ‘no-arm’ tackle. Baker taps the penalty, but a Saxons forward blatantly halts Charlie’s attempt to go quickly with a shoulder charge nowhere near 10 metres from where he should have been. Yellow Card to Saxons, with the half barely a few seconds old.

Shelford then extend their lead further with a sublime team try. Another break from deep by Mike Gillick sees him get in behind the Saxons defence, which although they haul him down, good supporting play by both Oli Emsley and Shingai Chiwanga sees their offloads rewarded for Lewis Cracknell to take the final pass and cross for a superb score, 13-19.

Shelford seemed ‘home & dry’ but from a Saxons catch & drive from an attacking lineout, they were awarded a penalty try for collapsing the maul close to the try line. Michael Dunnett saw yellow, and from being in a comfortable lead, we were then staring at a potential Saxons fightback as they clawed their way to within a score at 20-26.

Yet again, Charlie Baker came to the rescue with a fantastic 50/22 kick which gave us an attacking lineout in the Saxons 22. Southend were penalised at the lineout, and the resulting penalty was taken quickly by Baker.

Baker nearly went over for another score before finding Dan Barber on his shoulder, who crashed over the Saxons try line, converted by Biard for our 5th try and a final score of 20-33.

There was just enough time to restart the game, but Shelford were able to snuff out any possibility of Southend picking up a losing bonus point.

The Peacocks can feel mightily proud of their fightback from a 13-0 deficit against opponents who are always notoriously difficult to beat at home.

As well as seeing the first start for Will Tyrell, we also saw the debut of 18-year-old Will Buchanan from the bench. Well done to both Wills!

The 1st XV now has a weekend’s rest before the mouth-watering prospect of the visit of league leaders Sudbury heading to the Davey Field on November 27th, for a 1st v 2nd clash.