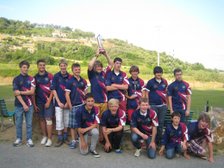 Shelford U15's from last season travelled to Imperia in Italy to compete in the first Carletto Oddene Rugby Tournament at the beginning of June.

The hosts also invited Genoa and a side from Menton, France.

The tournament commenced with all teams assembling on the pitch to sing respective national anthems and to allow pre match photographs to be taken.

Shelford played Imperia, the hosts of the tournament in the first match, comfortably winning the match 35- 0, with tries scored by James Walton (3), George Franklin (1) and Edward Manning (1). Ollie Barnes converted all the tries.

Menton then played Genoa and Imperia winning both matches.

Shelford’s second match was against Genoa and after a close fought first half the score was 7-5. Shelford increased the pressure against Genoa in the second half securing a 21-5 win. The try scorers were Ollie Barnes (1) & George Franklin (2), all tries were converted by Ollie Barnes.

In their final game Shelford played Menton from France. The match was very close with both teams having opportunities to score, but Shelfords defence stood steadfast and managed to break the Menton defence winning the game 14 - 0 and ultimately the tournament. Shelford tries came from Ollie Barnes (1) and Joe Akak (1). Once again Ollie Barnes converted the tries.

Ewan Cooper who captained the Shelford side collected the Carletto Oddone trophy at the post tournament presentation that evening with Ollie Barnes collecting the Player of the Tournament Trophy.