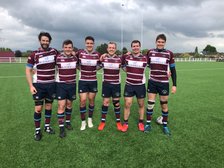 The last time Shelford played North Walsham Vikings was a very sobering 41-3 defeat away in only Will Cotterill’s 2nd game as head coach, so this game played under the current restrictive laws without scrums or mauls, was always going to be seen as a test of how far we’ve come as a team.

That 7-try defeat back in December 2019 to the eventual runaway league winners, now saw us playing against a team, in effect from league above us, in National 3. After being down at half-time 3-14, the 21-0 second half performance proved we have indeed come a long way!

The match saw a good number of players (all forwards too) pulling on the Peacock shirts for the very first time in a home fixture, with (L to R in the photo above) Ben Egan, Ben Bates, Pete Clark, Miles Huppatz, Will McGinn and Oli Holmes all making impressive home debuts.

It is easy to see why North Walsham Vikings can rip teams apart, in the first half they were very quick to spin the ball away from the breakdown and bring their fast and exciting backs into play. Shelford however were the first team on the scoresheet through a Lewis Cracknell penalty, but when Cracknell failed to convert his 2nd shot at goal, the Vikings caught Shelford napping, and from taking a quick 22m restart, they went the length of the pitch from 2 phases of play after sending the wide from the breakdown. 3-7 to Walsham.

The Vikings had clearly got their tails up from this, and quickly added a further score as the ball went wide again to force their way through our stretched defence, 3-14 to Walsham at the break.

Shelford finished the half strongly but failed to add to their solitary penalty. Wise words were needed from Coach Cotterill and his team, in particular the need to be more unified and aggressive in our defensive line, where one or two holes had appeared in the 1st half.

Shelford did just that and were much the better team in the 2nd half, keeping a really good tempo to the game and were brilliantly well marshalled by captain & scrum half Charlie Baker. Shelford fought their way back into the game from 1st phase play off an attacking lineout, with Mike Gillick crossing the line for our first try, converted from close to the touchline by Cracknell, 10-14.

The Vikings then had a player yellow carded, as Shelford continued to exert further pressure, and this resulted in Shelford going through a number of phases before we saw Jack Biard touch down for Shelford to regain the lead, converted by Cracknell, 17-14.

The final try for Shelford saw a sublime piece of skill from front-row replacement Oli Emsley, which saw him make a fine break from the back of a ruck before throwing an outrageous dummy and offloading to the supporting Lewis Cracknell, who sped away for a fine score under the posts. Cracknell converted to make the final score 24-14.

A very satisfying ‘day at the office’ for Shelford, backed by a gutsy performance by an extremely young Nomads side in their 0-14 loss to North Walsham Raiders.

We’ll be returning to face North Walsham in pre-season games in August.

Shelford will look to build on that performance in our next game, which is this Saturday and will see a combined 1st/Nomads squad in our return fixture against Letchworth. Kick-off is 2.00pm. Hope to see you there!