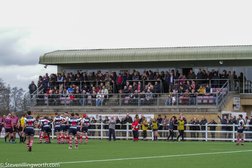 Promising signs for Shelford, but return from the coast pointless

A very promising second half performance by Shelford could and should be a springboard to give them some confidence heading into the most important period of their season.

On the back of 4 straight losses, even the most optimistic of Peacock supporters could have been forgiven for not holding out much hope against a top 3 side in the shape of Southend, and ultimately that’s what came about in a 45-21 loss, but a spirited second half performance saw them almost get something out of the game as they searched for the elusive 4th try late on in the game.

Southend’s big pack laid a solid platform for their impressive back line in the first half, and they were a threat from the kick-off immediately putting Shelford’s defence under pressure. Shelford were penalised for being offside, which was missed by fly half Ben Lloyd, but he made amends a few minutes later, as a late hit on him after his nudge through put Southend ahead 3-0 after 10 minutes of play.

Lloyd then put in a fine cross field kick for centre Chris Vaughan to gather on the full and charge over for an 8-0 lead after 15 minutes.

Shelford then managed to a get a foothold in the game, as Southend were penalised firstly for holding on and then secondly for being offside, but both long range efforts by Lewis Cracknell went agonisingly just wide. After 25 minutes, Shelford were very much in the game at 8 points down.

Things started to unravel for Shelford though in the final 15 minutes of the half, as firstly Harry Rogerson was yellow carded for being in at the side of a ruck, which considering the offence was on the halfway line, looked a bit harsh on Rogerson.

The resultant penalty was kicked to the corner and a neat lineout routine saw Southend hooker Danny Knight score in the corner, 13-0.

Soon after, another Southend penalty went into the opposite corner, but this time a catch and drive by their heavyweight pack resulted in their big loose head Collen Smith going over the line, 18-0.

Shelford’s miserable end to the half was completed by a slick Southend backs move, which saw their winger Tom Day dive over in the corner, for their 4th & BP try on the stroke of half-time, and with a 23-0 lead, things were potentially looking a bit bleak for the Peacocks.

Shelford to their credit, came out for the second half really positively, and after good phases and continuity, Southend were penalised for being offside. The penalty was kicked to the corner, Shelford’s lineout drive was stopped short before the ball was zipped wide for impressive teenager Jack Biard to go over the line, converted by Cracknell, 23-7.

Shelford had now got their tails up and went on the attack again with a fine break from another youngster Luca Martinelli, which set up a great field position for the Peacocks. Southend were penalised with a yellow card for their captain and ex-Peacock Ian Morrison for a blatant and obvious ‘in at the side’ at the resultant ruck, but this was also a culmination of offences of the pressure built by Shelford.

Shelford continued to attack with ball in hand and putting Southend on the back foot, but an attempted kick through to go behind the Southend defence ended up ricocheting off one of their backs for them to go the length of the field and score under the posts, 30-7. This was a game changer, as from the kick-off the ball went through Southend hands for their winger Tom Richards to go over in the corner, 35-7.

This was a cruel couple of minutes for Shelford, who could quite easily have been back in the game at 23-14 if things had gone differently…

Heads could have easily dropped at that point, but Shelford rallied themselves again, and from an attacking lineout that didn’t go exactly to plan, the ball looped over the intended catcher to thankfully fall into the arms of Louis Mann to crash over the line, converted by Cracknell, 35-14.

Shelford continued to have the confidence to attack with ball in hand, and a superb chip over and regather an onrushing Southend defence by Tukzz Naulusalasaw saw him break away for what would have been a fine solo try, but his generosity got the better of him as he passed onto the supporting Mike Gillick to dot down a superb try, converted by Cracknell, 35-21.

Shelford were now in shouting distance of 2 potential bonus points, but from a scrum on their 10 metre line, they were penalised for wheeling the scrum, and with Southend realising Shelford were starting to breathe down their necks, took the pragmatic option of going for the posts, which Ben Lloyd slotted, 38-21.

Southend finished the scoring from a fine break by their impressive 2nd rower Will Cooper, who offloaded out of the tackle to no. 8 Matt Wagstaff to cross the line under the posts, converted by Lloyd, 45-21.

Shelford pushed hard for a BP try, but a forward pass ended their attempt and with it the game.

Shelford should take huge encouragement from this game, pushing Southend’s weighty pack all the way. The Peacock forwards held their own in the set piece all afternoon, and the second half performance of Shelford’s back line should give them the confidence that they’re capable of worrying any team in this league, given a platform to work from as they did have in that second half. Cut out the small errors, and Shelford could have easily taken something from this game.