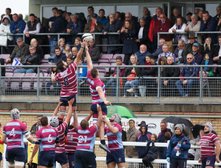 Many of the travelling Peacock Supporters were feeling pretty optimistic about how things were poised at half-time in this game at Chingford, with the game finely poised at 10-10. We had played the whole of the first with a strong wind and slope against us, and the consensus seemed to be with the elements now in our favour, as well as our fitness counting (as it did the previous weekend) in the final 20 minutes, this was a game there to be won. How wrong we could be………

Things didn’t start too well for the Peacocks, as the coach taking the players to the game for this double header with the Nomads in action too, almost broke down before we had arrived at the club. A replacement coach had to be sent to take the boys home.

On the playing front, a breakdown of a different sort to one of our key players, meant that Brad Baker had to pull out with a back injury during the warm-up, which meant Aki Lea started the match with Doug Finlayson being pulled onto the bench (after having a little warm-up with the Nomads for around 50 minutes!). Shelford were also missing Matt Gregerson and Shingai Chiwanga though injury, as well as Charlie Baker and Tukzz through unavailability, so some considerable changes too from the team that had won so well against Sudbury last week.

The game however started well for Shelford with Jamie Beswick making a fine run, but we knock the ball on in a promising position.

Chingford then won a penalty against us as we are caught offside, and they take the kick to goal from quite some distance out, which is successful 3-0 Chingford.

Shelford’s lineout was working really well in the first half, with Beswick and Jordan Freer not only securing our own ball but managing to make a mess of most of Chingford’s too.

Shelford took the lead after a great break by Michael Halatuituia who found Vili Koroibanuve in support. From the resultant ruck the ball went out to Lewis Cracknell who forced his way over with the help of a few Peacocks on his shoulder helping him along the way. Cracknell was carrying a bit of an injury going into the game, so was unable to kick as effectively has he had been in recent weeks, so kicking duties from the tee were handed to Jack Biard. Biard’s conversion was well struck, but fell just short in the wind, but Shelford had gained the lead 3-5, 12 minutes played.

Chingford were awarded another kickable penalty against us, but this time the attempt is hit wide.

Joran Freer then went on the charge with a fantastic break, but a lack of support means he’s penalised for holding on at the breakdown. Shelford then score after being under pressure in their own half. Cracknell kicked the ball behind the Chingford defence, but as they try and retrieve the ball the pace of Louis Tang forces Chingford to spill the ball in contact. Michael Halatuituia then picked up the loose ball and fed it onto the supporting Luca Martinelli who charged over from some distance to score a try from a great kick-chase, 3-10 to Shelford after 26 minutes.

Late in the half Chingford started to get on top of us a little at the scrum, as we concede a couple of scrum penalties. Chingford then move the ball wide from the set piece and we are found wanting in the defensive wide channels as we were against North Walsham and concede a soft try in the corner, converted well by Chingford to converge the score at 10-10 at the break.

We turn around in the second half thinking the game was there to be won, but we started to pick up a number of injuries to key players along the way. Injuries to Louis Mann, Jamie Beswick and Vili Koroibanuve starts to disrupt not only our structure, but our physicality too.

Chingford start the half well and are soon back in the lead with a penalty kick 13-10, and this is quickly followed by a break down the wing by their centre, who creates the space to put their winger away under the posts, 20-10.

Shelford then look like they have fought their way back into the game after a superb break by Biard. 18 year old Biard has been a stand-out player for us all season, but unfortunately his pass didn’t go to hand for Michael Halatuituia to run-in a simple try under the posts. At 20-17 we would have been back in the game……

We then also coughed up a well worked move in the LH corner, where a wild pass went into touch rather than backing ourselves to recycle the ball and have a little bit more patience. On small margins some games are won or lost….

Chingford upped their game and after putting a number of phases together find their way into the corner and take the game away from us at 25-10, 65 minutes played.

They completed the scoring with their BP try late in the game through some pretty poor Shelford defence, and run in under the posts 32-10, 70 minutes.

Shelford lost their structure in the second half, as well as Chingford finding their way through some of our defensive frailities. Injuries always start to play a part when you’re in mid-winter and the fixtures are coming thick & fast, but Shelford need to regroup for the home game v Harpenden this coming Saturday.

Another close encounter is on the cards as Harpenden lost at home to Sudbury 13-10 last Saturday, so Will Cotterill’s improving Peacocks will hope the result against Chingford was a ‘blip’ and resolve this with a vociferous home crowd very much behind them!!