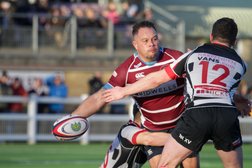 Shelford were extremely unlucky not to have got anything more than a losing bonus point, as Lewis Cracknell’s long range penalty effort to win the game in the last minute of play ricocheted off the upright to safety, but as in every game, the end result is formed over the whole game and not just the final 60 seconds of it.

Shelford were extremely dominant for the first 15 minutes of the game, which we seemed to spend camped in the Harpenden 22 for the vast majority of that time, bashing away at their line. Harpenden were penalised for coming in at the side of a ruck, which Shelford decided on going for the posts, but Cracknell’s penalty kick came back off the upright to remain scoreless.

Another penalty went against Harpenden, and this time we go for the corner and a really well worked lineout saw us maul our way 20 metres or so before it collapsed just short of the line under the posts. Although the easy penalty was despatched by Cracknell for a 3-0 lead, most Peacock supporters were wondering why we weren’t awarded a penalty try and even a yellow card too. An extremely dominant opening 15 minutes saw us only 3-0 up, when it could have been a whole lot more.

To rub salt in the wound, Harpenden score with their first attack. Shelford were penalised for hands in the ruck and they kick a penalty to the corner. Harpenden touchdown with their own catch & drive lineout and take the lead 3-5 after 20 minutes.

Shelford’s dominant scrum then shunted a Harpenden put-in our way, and quick hands by Aki Lea onto Charlie Baker creates space out wide, but in our eagerness to get the ball out to flying winger Louis Tang, we lose the ball forward.

Shelford’s scrum, now under the tutelage of Miles Anderson is unrecognisable from the first half of the season, as was seen in the game against Harpenden earlier in the season, when we were under constant pressure and going backwards at every scrum. Unfortunately, our scrum wasn’t rewarded with the dominance it deserved, as on a different day we could have been given a number of penalties in our favour.

Shelford nudged themselves back in front, and again we saw great work between Charlie Baker and Aki Lea before Lea’s neat off-load put Brad Baker away into the corner for a well worked try, 8-5 after 27 minutes.

Michael Halatuituia, our young Tongan back-rower was everywhere on the pitch, and was working particularly hard at the breakdown. Michael was harshly pinged for not releasing the tackled player, and this gave Harpenden the opportunity for another attacking lineout, but their drive is held up well by the Shelford pack, and we secure the turnover for a Shelford scrum. Shelford clear the ball to touch, but this gives Harpenden the chance for another attacking lineout which we repel, only to see the ball go wide through hands for them to dot down in the corner, converted well from the touchline, and saw Harpenden go in at half-time with an 8-12 lead.

The second half started with Harpenden in the ascendancy, and Shelford were penalised with Matt Gregerson being shown a yellow card for a technical offence. Harpenden yet again kick to the corner and drive over for an 8-17 lead.

Shelford respond well, and are awarded a penalty which Cracknell misses to touch, but a great chase-up by Louis Tang forces the clearance kick to be charged down, and as the ball is retrieved by Harpenden, we force them to ground it back over their line for an attacking 5 metre scrum. Shelford keep the pressure on the Harpenden line and eventually drive over young prop Owen Miller for his first try for the first XV, converted from the touchline by Cracknell, 15-17, 54 mins.

An injury to winger Alex Long saw Shelford shuffle their back-line, and with it the long awaited return of Will Lawson, who has been missing from our line-up for the best part of a year.

Lawson’s guile at being able to create or spot a gap has been sorely missed by the Peacocks, and he was immediately in the action, forcing a penalty against Harpenden, but unfortunately Cracknell’s kick went agonisingly wide.

Another superb break from midfield, this time from Doug Finlayson, and the play opens up further for Lawson to spiral a superb pass over to winger Louis Tang. Tang’s pace doesn’t quite take him over the line, but he has players in support which sees Cracknell receive an inside pass for a superb team try……… only for the referee to ruin our delight as he deemed Lawson’s pass to be forward.

It seemed only a matter of time for Shelford to get the winning score their enterprising play in the final minutes of the game deserved, backed by our vociferous crowd urging them on too, but ultimately it boiled down to one final attack, a penalty given to us on the Harpenden 10 metre line, giving the opportunity for Lewis Cracknell to step up and despatch the winning kick…… Only for the upright to intervene, giving Harpenden a chance to gather the ball and clear their lines and claim the win in a hard-fought and entertaining fixture.

Shelford have really found a renewed team spirit under the guidance of new Head Coach Will Cotterill, and under his calm approach and his positive attitude of ‘you either win or learn’, I’m sure they will not dwell too long on the loss itself, but all of the other positive elements that came out of this performance instead. But for the width of a post, the game would have been the theirs.

A tricky fixture away at Old Haberdashers awaits next weekend, which will no doubt test the Peacocks improvement further, before we return to the Davey Field for the ‘Farmer’s Day Lunch’ against Amersham & Chiltern on February 1st.