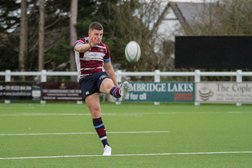 Shelford left Borehamwood with a richly deserved losing bonus point, which was the minimum they deserved, as they stayed with their 3rd placed rivals the whole way through the game.

The Peacocks were again shorn of a number of first team players as injuries continue to test Shelford’s squad depth, however, with a number of Nomads drafted into the squad, Shelford continued to show their spirit and desire to play for the badge.

Shelford were under the cosh immediately and had a series of phases to defend on their own line. Shelford’s solid defence kept OH at bay for a number of minutes, holding up the ball at one point over our try line. The attacking scrum was set, and the ball was shipped wide for OH to score in the corner, converted well from the touchline, 7-0 to OH after 8 minutes.

Shelford responded well and got a foothold in the game through a Lewis Cracknell penalty after OH were penalised for going off their feet at the breakdown, 7-3 to OH after 17 minutes.

The game continued in pretty even fashion with both sides showing their aggression in defence and nullifying each other’s opportunities, but eventually OH pulled away with a driven maul from a catch & drive lineout, where it seemed like every member of their back line joined in to force the score, 12-3 to OH at half time.

Shelford really upped their game in the second half, as they started to find gaps with some great lines from their support runners, with one particularly deft offload from Aki Lea finding Michael Halatuituia on his shoulder. Michael charged upfield before finding Jack Biard in support, who in turn offloaded to Cracknell who shipped the ball onto James Mepham to cross for a superb team try, converted by Cracknell, 12-10 to OH with only 5 minutes of the second half gone.

Shelford were then blighted with a couple of yellow cards, firstly for Jordan Freer for a high tackle, and then just as Jordan returned to the field Matt Gregerson took his place on the bench as he was carded for a technical offence, so for a continuous period of 20 minutes, the Peacocks found themselves down to 14 players. In spite of this, Shelford continued to put their bodies on the line and denied their hosts from getting away from them.

OH managed to eventually nudge themselves further into the lead by way of a penalty kick, which went to show how much we were concerning them in their inability to pull away from us. Their first penalty attempt hit the upright, which we then clear to touch, but we are then penalised for off-side in front of the posts, and the kick is put away for a 15-10 lead to OH with 10 minutes to go, but still only a score away.

Shelford were still very much in the game going into the final 10 minutes, especially as we were back to our full complement of players, and a superb break by Vili Koroibanuve creates a fine opportunity for us to gain the lead, but the offload is knocked on with the try line in sight.

OH finally put daylight between the two teams with a lovely missed pass down the wing for their centre to charge over the line from around the half-way line, putting the score at 20-10 with around 5 minutes to go.

Shelford respond well yet again from another sharp attack from the Peacocks, and OH are penalised for taking out one of our support runners. Cracknell takes the penalty kick, hits the inside of the upright but thankfully has enough on it to make it over the cross-bar, 20-13 with 3 minutes left. The game ends with no further score.

OH are 3rd in league for good reasons, they have an excellent kicking game which they control well through their fly half & full back and have a pack and lineout which sets a great platform from which to attack.

Our Peacocks battled well all afternoon and deservedly got something out of the game, but yet again the manner of the performance without necessarily getting the result is growing testament to the continuing good work being done by Head Coach Will Cotterill and his coaching team.

This was yet another battling performance from our young Peacocks, which should bode well for our home game v Amersham & Chiltern this coming weekend. A vociferous home crowd awaits the game after the small matter of a packed-out Farmers’ Lunch!