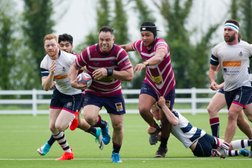 Shelford get the ‘W’ but miss out on try Bonus Point

Shelford’s youthful team continued to make solid progress with a deserved victory against game opponents Amersham & Chiltern, but missed out on the bonus point, finishing with 3 tries when it could have been a whole lot more. The win however was a fitting way to celebrate club stalwart Aki Lea’s 200th league appearance for the club alongside Fly Half Will Lawson making his 50th appearance for the club too.

Shelford had a couple of new signings in their ranks, with prop Jone Suka joining us from CS Stags along with Cambridge University Blue, centre Rory Triniman making their debuts for the club. We also welcomed back hooker Will Corrigan, who has become a very strong and vocal influence out on the pitch for our young side.

Shelford started with the benefit of the considerable breeze at their backs along with the low sun in the eyes of their opponents too, so on a sold out ‘Farmers’ Day’ lunch, the scene was set for what was a very entertaining, if ultimately nail-biting affair.

Shelford started poorly and a mix-up receiving the kick-off resulted in not only a knock-on, but a player handling the ball in an offside position, so found ourselves immediately under pressure. A & C kick to the corner and pressurise our line and almost turn their first attack into points, but we steal the ball to put Louis Tang away for our first foray into A & C territory. A & C are penalised for being offside and Lewis Cracknell steps up to give Shelford an early lead, 3-0 after 4 minutes.

Will Lawson then makes a superb break before giving an audacious off-load to Michael Halatuituia to continue the attack, but we knock the ball on in a threatening position.

Shelford continue on the front foot, this time through pressurised defence and a superb turnover by Jordan Freer wins us a penalty and gives us the opportunity to kick to the corner. We attack from the lineout but are penalised for holding on close to the line in sight of the posts.

A & C are penalised again at the breakdown, and this allows Cracknell to extend our lead with another successful penalty, 6-0 after 19 minutes.

Shelford then win a scrum penalty on halfway which allows Cracknell to nudge a fine touch kick close to the 5-metre line for an attacking lineout. Corrigan hits his jumper well, joins the maul and finishes the move off himself as we rumble over the line, 11-0 to Shelford after 22 minutes.

Shelford then look to attack from deep but knock the ball in our own 22. A & C win a scrum penalty which they kick for goal through their full back and are immediately back in the game at 11-3.

The Peacocks then get themselves back into A & C territory through another fine break by Michael Halatuituia, but A & C are penalised for lying all over the ball to prevent us going quickly. Cracknell slots another penalty for a 14-3 lead, 28 minutes.

Another fantastic turnover by the Shelford pack is backed-up by a superb kick by scrum half Tom Duffy, as he kicks in behind the A & C defence. Louis Tang then follows up the kick superbly well and forces the A & C defender to shank his kick and give us an attacking lineout. Shelford keep the phases going end eventually find their way over the A & C try-line as Will Lawson picks up the ball from the base of the ruck and dives over the line, 19-3 after 35 minutes.

Close to the end of the half, some superb footwork by full-back James Mepham sees him step inside a couple of A & C defenders, but unfortunately James loses control of the ball in the act of scoring. Unlucky James!

We finish the half at 19-3, but with us having the majority of possession and territory we were a couple of tries light. This also gave A & C encouragement for the 2nd half knowing they had the elements in their favour to come.

Shelford however start the second half very brightly, and a superb pass out wide by Will Lawson is knocked-on and sees us cough up another potential try, but this is soon forgotten as a superb team try sees the ball through numerous hands before finding its way to Louis Tang. Tang put on the afterburners to scorch away underneath the A & C posts, converted by Cracknell 26-3 after 49 minutes.

Shelford’s young back row of Martinelli, Rogerson and Halatuituia were prominent all game, not only at the breakdown in forcing turnovers, but also in the loose with ball-in-hand. Harry Rogerson put in a ‘Man of the Match’ performance at 7 and has fully justified his promotion from the Nomads team with his performances in the last couple of weeks. Doug Finlayson, in for the absent Brad Baker also put in one of his best performances for the club too.

A & C however then start to come back into the game, and we are penalised for not rolling away from the breakdown. A & C opt for an attacking scrum, which we are penalised at, followed quickly by a couple more. This eventually leads to a yellow card for debutant prop Jone Suka, but this slightly backfires as we have no props left on the bench due to an earlier injury to Matt Gregerson. A & C kick the penalty to the corner for an attacking lineout, which was surprising when we already had to go to uncontested scrums and they would have been guaranteed to win the ball. This however didn’t matter, as a well worked A & C lineout was driven over the line, converted well from the touchline, 26-10 after 60 minutes.

Shelford attack again and win a penalty which we decide to goal for goal with, but the penalty from Cracknell drifts wide into the stiff breeze.

A & C are soon on the attack again and would have scored in the corner if it wasn’t for a try-saving tackle by the Shelford defence, but A & C keep the pressure on and kick to the corner after they win another penalty. The lineout is won by A & C and a few phases later sees them kick to the opposite corner for their winger to gather and offloads to a supporting player for a lovely score, converted well from the touchline 26-17 on 72 minutes.

Shelford attack again, this time through another break by Halatuituia, and yet again A & C are penalised and we kick to the corner for an attacking lineout. Halatuituia comes off the pitch after this attack with a hamstring strain, so we hope our young no.8 makes a speedy recovery, as he’s become a really important player for us since he joined us just before Christmas.

The attacking lineout however is lost, and this gives A & C the opportunity to clear their lines and set up their own attacking opportunity late in the game. Shelford are then penalised for a high tackle which A & C decide to kick for goal and get themselves a losing bonus point (as well as a jittery final couple of minutes for the Peacocks too!). The straightforward penalty is surprisingly missed and an entertaining game ends with a win for the Peacocks, albeit one that we should have won more comfortably.

The ‘W’ was important and morale boosting for the Peacocks to get, as we’ve come very close in recent weeks, gaining losing bonus points against teams above us in the league.

Shelford now have a week off before returning to league action on February 15th with a trip to Brentwood. This fixture will be another one for our young team to gauge our progression against.

Head Coach Will Cotterill’s mantra of ‘you win or you learn’ will no doubt be turned around in training, as we now need to learn how to win better!