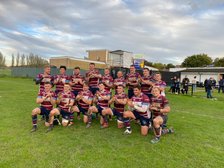 6-try Shelford impress on the road

Shelford laid the ghost of their last road trip to Brentwood with an efficient bonus point win at Chingford, setting themselves up nicely for the enticing visit to the Davey Field of Eton Manor next weekend, where 2nd meets 3rd in the league.

Shelford took the game to Chingford immediately, stringing plenty of phases together, being patient in their attacking play, backing our ability to spot the time to strike rather than force the ‘killer’ offload, which sometimes sees us cough up possession unnecessarily.

That time came early on in the game when Tom James got in behind the Chingford defence and offloaded a sublime pass to Lewis Cracknell who ran in unopposed to score and convert the first try, 0-7 after 3 minutes.

Cracknell then continued his rich vein of form with the boot, with two long-range penalties, giving Shelford a healthy 0-13 lead after 20 minutes.

Shelford went close to crossing the line but were held up, and Chingford’s clearance kick went straight to full back Jack Brosnan, making his first start of the season for the 1st XV. Brosnan charged up field, standing up the Chingford defence and leaving space on the outside for Louie Tang to do what Tang does best, outstripping the covering defence to dive in the corner for lovely counter-attacking score, 0-18 after 25 minutes.

Shelford’s third try was not far behind, as an attempted clearance kick by Chingford was taken well by the hardworking Nathan Taylor, also making his 1st XV debut this season. Taylor charged up field to set up an attacking ruck and smart thinking by Charlie Baker spotted space down the blind side of the ruck, and good link play with Jack Biard created the space for Alex Long to sprint over the line to make the score 0-23 at the break.

Shelford’s kicking game was much improved, spotting the gaps to turn their opponents at every opportunity, as well as chasing hard to put their defence under pressure too. Shelford’s defence was also much improved after leaking some soft tries against Belsize Park the previous weekend.

Shelford started the 2nd half searching for the 4th and BP try, and this quickly happened as Chingford’s attempt to attack from deep in their half was intercepted by Jordan Freer. A few phases later Ben Bates powered his way over the line to put Shelford out of sight at 0-28.

Jack Biard then broke through several tackles to score a fine solo try, taking his usual bang on the nose for his efforts, converted by Cracknell, 0-35.

Shelford’s discipline then seemed to irk the referee, to the point where we were marched back a further 10 metres on consecutive penalties. This gave the hard-working Chingford pack the rare opportunity to get into the red zone as they converted their chance to score after a number of phases with a converted try, 7-35.

The last word went to Shelford as another break in behind the Chingford defence by TJ was well supported by Matty Eyres. Eyres, for the 2nd week running put away a lovely offload to Charlie Baker to cross the line and cap a fine performance by the captain. Cracknell converted the score to complete the game with a 7-42 victory.

The game however finished on a downer as one of our talismanic players, Doug Finlayson dislocated his shoulder, which will probably see him out of action until the new year. Doug will be a huge miss for us in the run-up to Christmas. Get well soon Doug!

As mentioned, the upcoming game this weekend against Eton Manor is probably our biggest game of the season so far. We hope home advantage along with the boisterous backing of the Davey Field crowd can make the difference in what will surely be a tight affair.

A depleted Nomads squad secured another impressive away win at Brentwood, with a BP win 12-24 to stay top of the league. They also have Eton Manor breathing down their necks! The Nomads are at home this weekend against Chingford and will look to build on their good form.