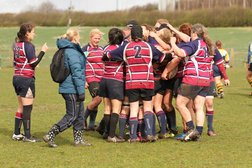 After a long and disrupted season, Shelford ladies finally achieved their aim, away at Worcester, by finishing off the year undefeated...

The ladies travelled to Worcester after a hard fought win over an extremely competitive Deeping Devils last weekend, knowing that only a win against Worcester IIs would secure the league championship over close rivals Lichfield IIs.

The match started positively as Shelford’s hard running inside centre and vice Captain, Lizell Heather, shrugged off several tackles to break through the Worcester defense and run in the away side’s first try of the match, directly under the posts. After briefly catching her breath, Heather then stepped up to convert her own try. With the first points on the board, the floodgates opened, and Shelford ran in another 3 tries unanswered in the first half, two more of which were converted by Heather. Tries were scored by prop Kristin Wilson, outside centre Meredith Jordan and scrum half Charlie McLaughlin.

After a short, very cold and very wet half time break, with minimal comments for improvement by coach Ben Walshe, the Shelford ladies made their way back onto the pitch, described by one supporter as ‘looking like a team of Avengers’. The goal for the 2nd half was clear, get a bonus point win (total of 5 tries needed in a match), and end the game without conceding a point. It was clear that Worcester IIs also had a goal, and stepped up their performance, however, it was no match for Shelford, as the ball was constantly stripped by the Shelford players at the breakdown. Shelford also made use of having two talented jumpers in the line out, in captain Bertille Gleize and Hannah Aspden, disrupting and stealing every line out by the opposition. Tries quickly followed, with a 2nd by Jordan, one from flanker Kathryn Robinson, a fantastic display of forward dominance by the scrum driving Worcester’s pack off their own ball and over their own try line, for the ball to be grounded by Gleize, followed by another try under the posts by new recruit, winger Liv Pilbeam.

Finally, it was fitting that the ninth and final try of the match was scored by Shelford’s 2nd row stalwart, Aspden in her final league match for Shelford after nine years with the club.

It was a match massively affected by the vastly changing weather conditions, a swirling wind was compounded with driving rain and even hail, meaning Heather’s high conversion rate in these conditions, was even more impressive.

Without a doubt, this was a full team performance with the forwards dominating in the scrum, winning all of their own ball, and winning 85% of the scrum against the head. Due to the weather being optimal for a forwards game, the backs adapted their work rate superbly by acting as a second set of forwards and throwing themselves into every ruck as well as being available as strike runners.

Shelford Ladies have been supported all season by Shelford Rugby Club, along with sponsors the Alma Cambridge, and now look forward to a play off in April against the top of North Championship 2, the winners going forward for promotion to Championship 1, one level below premiership.