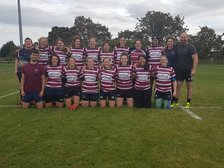 A spirited performance from the peacocks

A well drilled Peterborough side came up comfortable winners in the opening league match of the season, but they had to come from behind to overcome a spirited and brave peacock performance.

The opening exchanges were all Shelford, with big ball carries from Erin Jobson and Leanne Robinson setting the tone. The pressure eventually told with footballer-come-Rugby player Danielle Busby scoring her first ever try in the corner.

Big hits came flying in from Helen Lambert and Chris Martin as Peterborough looked for a reply. It was only the result of quick hands from the Peterborough fly half, who was later named player of the match, that the defences were eventually breached.

Peterborough continued the momentum to take a healthy lead into the break. The second half started with Shelford seemingly not being able to get a break. With 10 minutes to play the peacocks looked likely to earn a deserved consolation try, only for Peterborough to run in 2 tries against the run of play and add gloss to the score line.

Congratulations to Sarah Peet, Laura Nunez-Mulder, Marienne Cacho Pires, Millie Rose and Mya Kirkpatrick on playing their first games for Shelford, and first ever game of 15's rugby in the cases of Sarah, Mya and Marii. Big shout out to Fi Douglas and Bertille Gleize for big performances after long stints out of the game. The latter was deservedly voted peacock players player for her outstanding ball carrier and dirty work in the loose.