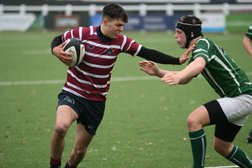 A strong start to this season’s cup competition

Exactly eight months to the day, after playing them in last season’s County Cup Final, Shelford U16s met Saffron Walden for the first match of this years competition.

Exactly eight months to the day, after playing them in last season’s County Cup Final, Shelford U16s met Saffron Walden for the first match of this years competition.

Saffron Walden are always a strong opposition and today they kicked off and kept the ball in Shelford’s half for the first turn of play. Shelford’s defence was put under pressure several times but the line held and gradually the ball was worked back into the oppositions half. As the ball got towards the try line , the opposition kicked to clear but Shelford charged it down and the ball went dead. At the scrum, Will Rand got his hands on the the ball and ran for the try line to score Shelford’s first try, ably converted from well out towards the touchline by Harvey Taylor.

Walden restarted and again put the pressure on the home side with a lot of play in Shelford’s half. This paid off with a great breakthrough run on the left wing which resulted in a try and a conversion to bring the scores even at 7-7.

Shelford knew they needed to answer this and as the ball was worked down the pitch from the restart, Will Rand saw his chance and drove thriough, what seemed like half of the oppositions players, to touch down and score. Again Harvey Taylor converted to bring the score to 14-7.

Minutes before half-time Shelford were awarded a penalty in front of the posts and made an intelligent call to put three further points on the board as Harvey Taylor successfully kicked for goal to end the first half 17-7 ahead.

Joe Gregory had narrowly missed out on a try in the first half as he was tackled right on the try line. His perseverance paid off however as he sped up the left wing early in the second half and scored the first try of the half, gliding over the try line as he was brought down.

Shelford kept up the pressure on the opposition and were determined to play the game in their half of the pitch. Henrique Malheiros won the ball 5m out and powered through the defence to score and shortly after the restart, Will Rand achieved his hat-trick with another powerful run through the defence.

Just before full-time some wonderul play from the squad saw Harvey Taylor pass the ball out from in front of the posts to Sam Arbon who made signifcant ground before passing to Josh Barrett who drew in the defence and then passed out to Henry Porter-Clarke. Henry hit the gas pedal and sped over the try line to score Shelford’s final try, converted by Harvey Taylor to end the match 39-7 to the home team.