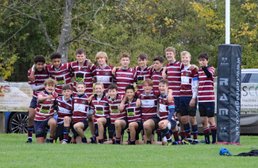 Under 15A County Cup versus Saffron Walden

Saffron Walden A 0 v 64 Shelford A

Shelford’s first Under 15’s County Cup match was played at Saffron Walden on a gloriously sunny November Sunday.
The standard of the Shelford Rugby was extremely impressive from the first whistle.
The forwards were dominant in the set piece and in open play, frequently turning the ball over. The whole forward unit was notable with every man delivering a strong performance: Ali Goodman had a particularly good game and was named Man of the Match for Shelford. The backs moved the ball deftly and accurately, with effective supporting runs allowing for try scoring off loads. Clever kicks from hand by Sam Doubleday and Ben Carey led to well taken tries. The defence, while never particularly under pressure, was strong and did not allow Saffron Walden to ever get on the front foot or develop any rhythm.

There was a well deserved hat trick of tries for Charlie Heal and Kyal Edmonds and a brace for Sam Doubleday. In addition there were tries for Tui Baleisolomone and Fraser Christie. Fraser also had a fantastic day with the boot, converting seven out of ten, many from tricky pitch positions.
Overall a compelling victory built on strong team work.