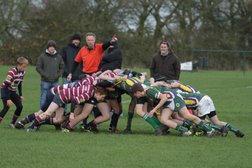 The start of the game saw play moving back and forth between the two sides. Shelford showed strong defence with great tackling from Ben Coney and Hayden Stafford in the forward line.

There was poor handling in the backs from Saffron Walden however with the ball going backwards they moved from right to left to score after 12 minutes.
Saffron Walden soon had the ball back in hand but were held back by great tackling from stand in wing Charlie Selmes.

Three further converted try’s saw the visitors down 28-0 at half time.

The pressure was maintained leading to a series of penalties by Saffron Walden, with Shelford almost getting over the line through great forward play. What seemed like a try was turned over by Saffron Walden who kicked up the field leading to them breaking away for another try.

Saffron Walden regained the ball from the kick however again good tacking on the Shelford wing saved another break away.

Shelford moved into the opponents half however a series of scrums saw Saffron move to a strong position on our 22. Play was turned over by Shelford and kicked but returned for another Saffron Walden try.

As the sun came out Shelford moved forward to the left corner for a line out. The ball was taken in by the forwards with repeated drives towards the opponents try line. Despite the good forward driving Shelford could not move over the the ruck and possession was turned over by Saffron Walden again.

A great kick from Joel Butler-Burd saw Felix Brown hack through and what again looked like a sure try by Alex Illingworth continued with play moving on and possession turned over again by Saffron Walden.

The final play of the game saw a scrummage to Shelford. An offside from Saffron was kicked to the corner for a lineout.

More strong play from Shelford and great forward pressure led to another penalty by Saffron Walden. A quick tap from Thomas Gallagher took him meters from the line but the ruck was held up and Saffron Walden took the ball to touch for the final whistle.