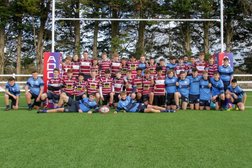 Shelford knew that they were going to be the dominate team, as St Neots have had a major reshuffle this season and were fielding a mixed level of rugby experience for this County Cup fixture. This was clear as the game started with Ben Carey scoring the first try in the first minute after the kick off, which was promptly converted by Fraser Christie.

St Neots were no match for Shelford’s dominance both in attack and defence and in the 3rd minute Sam Taylor’s sprint was rewarded with the second try of the game also promptly converted by Fraser Christie.

Any attempt by St Neots to wrestle the control of the game was thwarted and Shelford were rewarded with the 3rd try by Charlie Heal, which with conversion made the score 21:0, which was swiftly followed by four more tries in the remainder of the first half: Fraser Christie in the 12th minute (28:0); Hayden Everett 15th minute (35:0); Archie Crane – 20th minute (40:0) and another one from Charlie Heal (47:0).

Injuries and exhaustion began to take its toll on St Neots, despite commitment and hard work by St Neots players and after a brief consultation at half time we decided to conclude the match and continue playing a social game with mixed up teams instead. The players enjoyed the rugby and had a great barbarians match for the second half of the match.