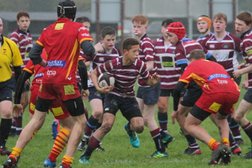 Under 15B County Cup versus Cambridge

Cambridge kicked off the game and quickly moved into Shelford's 22 where Shelford gave away a penalty for holding on to the ball whilst on the floor. Cambridge took the advantage and scored a try with a conversion, 7:0. Shelford worked hard with fantastic handling as the team surged forward keeping the ball in their 22. Some great tackling from Cambridge saw Ben Coney taken into touch but Shelford soon claimed the ball back leading to a try by Josh Schiller and a conversion by Joel Butler-Burd which evened the score at 7:7. The game continued and Shelford found Cambridge camping on the 5m line leading to a unconverted try around Shelfords blind side.

The game restarted and Shelford kicked off. Shelford put the pressure on in the scrum but Cambridge responded with another scrum under our post, we managed clear the ball into touch. The rain was steadily becoming worse as the game continued but a line out maul took the ball over for another Cambridge try with no conversion. The score 17:7 as the game kicked off again with a missed tackle by Shelford allowing Cambridge to chip the ball forward. Cambridge took full advantage and scored another try which they failed to convert, score 22:7

The forwards worked hard with scrum after scrum but a turn over possession resulted in a breakaway try by Cambridge with another missed conversion, score 27:7 As the play continued Cambridge broke away again after a couple of missed tackles and and they claimed another try, still failing to convert - score 32:7. Shelford battled on and were rewarded with a penalty but the ball failed to make touch and Cambridge regained the ball. cambridge headed for the try line but a fantastic try saving tackle by Ari Fogh stopped Cambridge, and the ball was kicked into touch.

Another turn over possession gave Cambridge their final try of the game which they again failed to convert.

Despite the weather and the final score there was some excellent play by Shelford, dominating in the scrums, and good rucking and mauling. We should not be disheartened by the result. Well done to both teams.

Playing on pitch 4, 3rd along from the entrance.