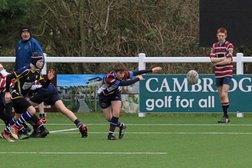 Following a Christmas break, likely filled with rest and relaxation, it was a well motivated Shelford B team that took on St Ives for their last round of the County Cup. The team were straight into the game with Shelford heavily defending and throwing out tough tackles. Despite many bodies holding onto a St Ives player they approached their try line within 1 minute. However, strong defending and a clearance by Joel Butler-Burd prevented an early concession. St Ives demonstrated strong passing skills but Shelford pushed forward. St Ives won the ball and managed to score a try after 10 minutes of play. A missed conversion followed by a good run by Nico Harter, excellent tackling and pushing forward brought the Shelford side close to their try line. Alex Illingworth picked up the ball bringing it close to a try; however, we were quickly back defending with outstanding tackles from Bryce Holland, Johnny Newton and Avaan Barnet. Despite an excellent run from Gus Hartree, St Ives scored again bringing the score to 10:0.

St Ives scored soon after after a break in play and made the conversion moving the score to 17:0. Shelford B excelled in their persistence, tackling on the run and the game was certainly closer than the score line. Following a line out from a penalty and an excellent driving maul, Ben Whiddett made a great run for the line. This was picked up and driven by Ben Coney to score Shelford’s first try. Tyler Bennett was unlucky, just missing the conversion.

Back from a short break Bryce made a great tackle on the open. The game was again competitive on the Shelford line. Felix Brown kicked it down with Coney then diving in for the second try for Shelford. Brown narrowly missed his conversion bringing the score to 17:10. Shelford continued in their hunger to turn the game around. Shelford did well to hold St Ives off their try line despite strong pressure. Barnett had a good run with the ball but was unable to break through. Butler-Burd picked up from the tackle and Barnett returned to give a good chase. A surprise mistake let St Ives score again. They missed their conversion and Shelford continued to fight back with great tackling and continued attempts to break through. St Ives scored again. Great tackles from Harter and runs from every player on the team were on display. Passing improving from Shelford, although St Ives were lucky to intercept a stray ball to score one final time.