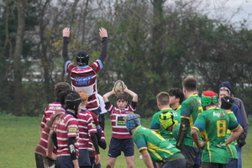 Shortly after the start of the match we pushed forward and got a scrum on the left some 5m from the try line. Yuijan Zou took the ball behind the scrum, pushed forward and to the right and scored the first try of the match - convert by Joel Butler-Burd. There followed a period without tries where both sides gave some good energetic rucking and where a couple of threatening breakthroughs from Huntingdon were stopped. Midway through the half 5-6 players from our side were substituted which may have caused us to lose a little concentration.

The rest of the half continued with energetic play from both sides where Huntingdon was a little more dominant and scored three tries in this period (one converted) - all with the ball going to their backs on the left, no immediately successful tackle, and a moving game to get the ball in touch.

We had another large substitution at the start of the second half and relatively soon Huntingdon again got the ball to the left wing and moved to get a fourth try (unconverted).

We then had some sustained pressure and Zou again took the ball from behind a scrum close the Huntingdon touch line and pushed forward to score our second try. Huntingdon then scored another (unconverted try), followed by another attack on the left wing which this time was stopped close to our touch line. A few minutes later Huntingdon took a fast penalty on the left around the center of the pitch with about four players on a line running after the kick - passing and weaving trough to score a try (converted). We then put in a sustained attack, starting with a good long penalty kick to get a lineout by Joel Butler-Burd. This was followed by a series of lineouts where we kept control, pushed forward the maul and forced Huntingdon to give us another lineout close to their try line. We kept pressing and at one point tried a kick diagonally across the pitch amongst the defenders which Huntingdon unfortunately got to first. Shorlty after Huntingdon got the ball away with a long kick, which one of our players took on the chest without catching it. Players from both teams ran for the ball and tried to catch it (rather than diving on it) and Huntingdon got control of the ball and ran it in for the last try of the match.

All in all, Shelford put in a good effort. We played energetically, tackled vigorously, and did well with rucking. The main problems came from Huntingdons attacks on the wings where they kept getting too much space and momentum for us to stop.