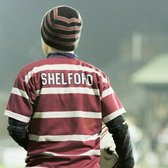 A decent sized squad of 22 made the journey up the road to play Huntingdon on a becalmed balmy Sunday morning – it couldn’t have been more in contrast to the chaos of Storm Doris only 72 hours earlier. The game was played over four 15 minute quarters.

Given the excellent conditions for playing running rugby the team were tasked to really up their support play in attack and keep the ball alive as much as they could. It was a challenge that the whole squad rose to with superb effect and a few handling errors actually left a number of other tries out on the pitch. In the first quarter, the visitors quickly settled into their stride and scored two excellent team tries through Will Rand and Alex Lee. They were given a reminder to keep their depth in attack as the Huntingdon outside half pounced on a flat pass and ran through to score. Shelford regrouped quickly and before the break scored again through some quick hands in midfield giving Samuel Arbon the space to touch down.

The second quarter was a little bit of disjointed affair to start with, with both sides making handling errors. But when Shelford clicked into gear they did so with precision and scored two further tries through Tom McFarlane and Joshua Barrett.

The visitors saved some of their best rugby for the third period, helped by some loose tackling, to really move the ball around the park, which together with some excellent work at the breakdown, produced a number of turnovers. All in all it gave Shelford the space to score six unanswered tries through Joshua Barrett, Utku Cihan, Hamish Westbrook, Eoin Collins and a brace for George Shannon.

Both sides tired in the final quarter with some iffy handling meaning the scum set piece featured heavily. But again when Shelford did keep the ball in hand they looked very impressive and finished off with two scores from Samuel Arbon and Joe Huntley, both of which came through excellent counter-rucking in midfield, completing a 65-5 victory.