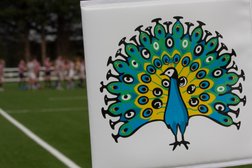 Fogh, White and Barnett with hatricks...

Under 13’s – 19th November 2017
This Sunday,Shelford played Hadleigh on a day that thankfully warmed up quickly from the frosty start.
Hadleigh needed players to even up the sides so thank you to all the boys that swapped across.
Shelford Tigers 8 tries (40) v Hadleigh 1 try (5)
Try Scorers – Dylan Samujh – 1 try , Ari Fogh – 3 tries, Billy White – 3 tries, Dylan McIver-Whinch - 1
Shelford Tigers started off with a bang. Joel Butler-Burd's kick off was dropped by a Hadleigh player, gathered by Billy White who fell on the ball and allowed a ruck to be set which was won. After a pass by Alex Illingworth, Dylan Samujh steam rolled over for the opening try. In succession, Butler-Burd's restart was lost by Hadleigh and taken by Ali Goodman whose ruck was passed out to Ari Fogh for him to open his account for the afternoon. White, in open play, bisected the oppositions defence with a dummy then scoring. The next try came quickly, again for Shelford, White turned the ball over as another breakdown was formed allowing him to pick and go under the posts for his second try. A few phases passed before a play which started from scrum-half Butler-Burd, to centre Noah Bateman who gave a perfectly timed pass to Samujh, then Fogh who pinned his ears back and sprinted towards the try line, outpacing a few Hadleigh boys who couldn't keep up. A tap restart by Butler-Burd 5m out was passed to Samujh, then popped to Dylan McIver-Whinch, who drove through two attempted tackles to charge over the whitewash. 30-0 lead by Shelford at the end of the half.
In the second half, great runs from Bateman, Goodman and Zach Whieldon came as well as Sam Doubleday and Illingworth's passing on counter attacks became hard for Hadleigh to defend against. Shelford kept mounting the pressure until Fogh scored his hat-trick, another team try for his third. Hadleigh scored their only try of the game. White added a dummy to add another try for his hat-trick in the match. The points board went still until the end when, another fast thinking try from Illingworth took a quick penalty followed by a dive over the line. Final score Shelford 40 Hadleigh 5
Shelford Sharks vs Hadleigh
Shelford 6 (30) - Hadleigh 3 (15)
Try Scorers - Fraser Christie – 1 Avaan Barnett – 3 tries, Yujian Zou – 1 , Vincent Yip – 1
Early on in the game Fraser Christie took a quick penalty pass to Avaan Barnett who ran in from half way. Hadleigh responded straight away to equalise. From the kick off Christie caught and passed to Barnett for strong run down the wing to score again. A dropped pass by Hadleigh on their 22 allowed Barnett to pick up and run in again closely followed by a quick tap penalty 5 metres out from Fraser to make it 4-1 at half time.
Early on in the second half came the try of the match with the ball passed from Vincent to Yujian with a stunning line to crash through the midfield from half way and score under the posts. This was closely followed by a strong run from Ollie Spencer who found Yujian in support but was tackled just short of the line but had Vincent in support to score. Hadleigh never gave up and scored two tries quickly to finish the game.
Share via
FacebookTwitter
https://www.pitchero.com/clubs
Recent news