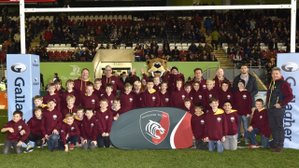 Challenging conditions but game on

The boys had to cope with extremely challenging conditions today, as well as an in-form Bury side that ran in 7 tries to our 2. But the score was deceptive as Shelford produced some quality play throughout.

The conditions caused both sides to struggle to hold the ball. But despite the ball slipping out of hand and plenty of knock-ons, our boys maintained good possession in the first quarter and did well under pressure that saw Bury score first. Their second quickly followed off a scrum from our knock-on 10 yards from our line.

But they didn’t have it all their own way and soon after Yujian Zou got on the end of a ball from Bryce Holland and scored. Bury came straight back with strong pressure in the backline and scored their third in the corner, though Sam Hartwright did a great job covering as fullback throughput the first half.

They were penalised for a high tackle and we applied pressure in the centre. Fraser Christie saw a gap, took a quick tap-and-go and ran our second into the corner, managing to score while being tackled.

Bury’s impressive backs then passed well to put their winger over for their fourth try. They continued to push us hard for the rest of the first half, but there were some strong, straight charges from Johnnie Newton and Hayden Everitt.

The conditions actually seemed to get worse in the second half and it became a war of attrition on a slushy pitch. We were tackling well. But Bury scored between posts, then quickly added another in the corner. The last quarter was marked by a great solo kick and chase by George Buchanan that got the crowd to its feet, but he was unlucky to be denied in the corner. Bury had time to run in their last try before some very cold and soggy players called it a day.