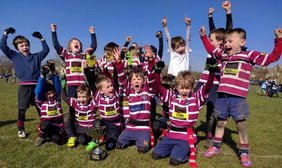 Under 7's Win the County Cup

First off - A big thanks to Cambridge RFC for managing to organize a great tournament in the face of uncertain attendance, that was packed with activity and luxuries like grass!

Shelford U7s fielded three teams, the most of any club present, with the aggregate score of of the A and B Teams, contributing to the overall tournament result. The C team was competing in the 'Development Team' competition and featured the U7s that had the least experience - Most had only joined Shelford this year.

It's easy to forget but plenty of the A & B Team U7s 'veterans' are already heading toward the end of their third season. Even so, some of the passing and positional awareness displayed, seemed mature beyond their years. The opposition were frequently confused as to why two players, both on the run and in possession of both of their tags, should want to pass a ball! The results bare witness to the power of team play and a developing awareness of what Rugby is.

A special mention is reserved for Stanley Wells, who was at the centre of play all day, displaying speed and selflessness in his play. As our man of the tournament, we sent Stanley to collect The County Cup at the final ceremony.

The Development Squad made us no less proud. Winning three and drawing one of their group matches, they only succumbed to a narrow 7-8 defeat in the final. It only really dawned on them that second place was a very good result as the final standing were read out.

Players, parents and coaches alike finished the day on a high, with many first time tournament players now having tasted the excitement of results based competition and now are hungry for more.

Finally, a big thank you to all of the coaches and especially the parents. We are lucky to have an such an engaged group of parents, who provide so much assistance, stepping in when the coaches are stretched. On behalf of the coaches, we really do appreciate this.