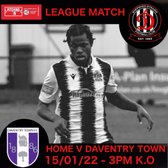 By Shepshed Newsdesk
5 days ago
Share via
FacebookTwitter
https://www.pitchero.com/clubs

This Saturday is our first home game of 2022 as Daventry Town are the visitors to The Dovecote Stadium in the Pitching in Northern Premier League Midlands Division kick off 3pm.

Shepshed will be looking to get back to both scoring and winning ways. Despite showing encouraging performances and creating chances Dynamo have failed to score or pick up points in their last three games. Although they still remain fourteenth in the league table. They should welcome back from suspension Niall Prenderville and Jordan Smith and also Jack Macmillan and Toby Ritzema. Although they maybe without goalkeeper Brandon Ganley who was sent off at Spalding United last Saturday.

Daventry Town are currently seventeenth in the table having played 23, won 4, drew 6 and lost 13, scoring 26, conceding 55 on 18 points. Of their last five games they have won 1, lost 2 and drew 2. They were 1-1 with Coleshill Town, 5-0 defeat against Chasetown,3-2 victory over Corby Town, 3-2 loss to Carlton Town and a 2-2 last Saturday against Loughborough Dynamo which by all accounts they should have gained maximum points.

The two teams have only met once in the past on 28th September 2021. On a Tuesday night where the rain never stopped Shepshed won 5-0 at Elderstubbs through goals from Karl Demidh x2, Jordan Smith, Ben Starkie and John King. This took to Dynamo to their highest position they have held in the Division so far this season ninth. Ten of the players who performed that evening remain at Shepshed to date and nine of Daventry's team were part of last weekends draw. Returning to The Dovecote will be Daventry's goalkeeper James Martin who made fifteen appearances between the sticks for Shepshed in 2012.

Admission to The Dovecote Stadium is £8 Adults, Concessions £4 Under18's £1. Please note entrance on the turnstile is Cash Only as well as the programmes £2 and goalden goal £1 (First and last goal stands).

The Clubhouse will be open from 12pm and accepts cards with a minimum payment of £5 and the Snack bar (Just passed the players tunnel) and Club shop (behind the goal) will be open prior to the game.

If you can't make it up The Butthole on Saturday live updates will be on the Clubs official twitter page and the BWA on Tour Facebook page.