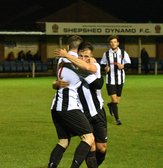 Dynamo not at their best but victorious nonetheless

Shepshed Dynamo battled to a hard-fought victory against Birstall United at The Dovecote in the United Counties League Cup.

Damion Beckford-Quailey's side found themselves in an almighty scrap of a contest, and were not at their prolific best. Debutant Tom McElroy handed them the advantage early on, but Birstall rallied and equalised in the second half after Matty White denied them from the penalty spot. Substitute Matt Melbourne netted the decisive goal in the 86th minute and inflicted a somewhat harsh defeat upon the United Counties Division One outfit.

Shepshed, who made several changes from last Saturday’s 5-0 league victory over Sleaford Town, got off to a perfect start. They produced some slick build-up play on the edge of the Birstall box. McElroy received possession inside the are and exhibited great skill to elude the attentions of his marker and he blasted the ball into the top corner to hand his new club the lead on nine minutes.

Birstall conjured a defiant response and almost restored parity five minutes later. Lewis Dodd found Ryan Rowley with an excellent through ball that spliced open the Shepshed rearguard. Rowley fired a low effort towards goal from a tight angle and drew a good save from Matty White.

That was the last action of any note in the first half bar a late challenge from Reif Armstrong - who quite understandably received a yellow card for it - on the stroke of half-time. Dynamo duo Harry Wakefield and Liam Hurst saw efforts blocked but United dug in and ensured that the game remained in their grasp.

Dynamo made as sprightly a start to the second half as they did the first. Jake Betts embarked upon a bold run forward and saw a deflected effort fly past the post. Wakefield drew another decent save from Birstall ‘keeper Freddie Young.

But Shepshed’s momentum soon disappeared in a haze of lethargy and wasted attacking opportunities, and Birstall soon found themselves in a fantastic position to draw level when Betts handballed inside the area. Ash Day stepped up to take the spot-kick, but White denied him with a brilliant stop, diving low to his left to keep his side’s lead intact.

Birstall however were undeterred in their pursuit of an equaliser, and they found it nine minutes from time. Dexterous play midway inside the Dynamo half led to Dre Articolo finding Tom Vyce with a pass. Vyce turned on a sixpence and hit with the outside of his foot a sumptuous shot and it arrowed past White into the bottom corner.

The match now seemed destined to go to the lottery of a penalty shoot-out, but all Birstall’s good work was to be of no avail. They were careless in possession and gifted the ball to Shepshed. McElroy surged forward on the left and found substitute Melbourne inside the area. He tried to round Young, who felled him.

One could almost hear the sharp, collective intake of anguished breath as the Dynamo forward placed the ball on the spot, and one could feel for certain the explosion of relief that followed. Melbourne converted the penalty and planted a nonchalant effort into the bottom corner and secured his side’s place in the next round.

The result was a tad harsh on the visitors, whose play was spirited and sedulous in equal measure, akin to some indefatigable miner hammering away in search of precious ores. They made Shepshed work much harder than they would have liked for the victory, and Vyce’s excellent goal capped off an impressive display from the lower league outfit. The hosts will not care one jot, and have going into Saturday’s crucial clash at home to Rothwell Corinthians yet another morale-boosting victory.