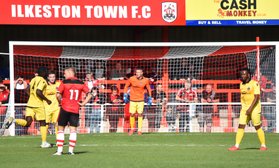 Although not overawed by their higher league opposition the experience told in the end as Ilkeston Town booked their place in the First Qualifying Round with a 3-0 victory at The New Manor Ground on Saturday.

Ilkeston's goals came from a ninth minute penalty from Alex Troke and a goal in each half from Zak Goodson.

Shepshed were forced into two key changes with both Captain Jake Betts and Central Midfielder Niall Prenderville picking up injuries in Tuesday nights 2-1 away win at Lutterworth Town. Dynamo juggled their back four around and brought in Shay Brennan and Karl Whymark to replace the injured players. Dynamo's cause was further plighted at half time when goalkeeper Matty White was forced off with an injury. However makeshift keeper Lewis White certainly acquitted himself only conceding one goal and saving a Goodson penalty.

The first chance of the game fell to Shepshed John King breaking down the left hand side and forcing a save from Ross Durrant on three minutes.

But the hosts soon settled down with Ollie Brown - Hill off target a minute later. Alter a neat move and cross down the wing from Kieran Fenton, Matty White saved well form Goodson.

Ilkeston took the lead on nine minutes Billy Bennett was brought down in the box by Jordan Smith and the ref had no hesitation but to point to the penalty spot. Former Shepshed forward Troke stepped up and beat Matty White in the bottom right corner.

Troke then went close again on twenty minutes but Matty White was on hand to save from the Robins centre forward.

Ilkeston doubled their lead on twenty seven minutes Jamie Reid's ball over the top was controlled well by Goodson who then fired passed Matty White.

There was then a lengthy delay on thirty five minutes when Durrant had come to claim the ball and landed heavily after a collision with one of his own defenders.

Although still looking dazed Durrant pulled off a superb save on thirty eight minutes tipping Whymark's shot onto the crossbar for a corner.

Ilkeston nearly made it three on forty two minutes Bennett beat Matty White but Jordan Wakeling did well to clear off the line.

The final chance of the half fell to Shepshed but King's effort was blocked in injury time.

Shepshed knew they needed an early goal if they were to get back into this tie but were dealt a further blow as Matty White had picked up an injury later in the first half was and unable to continue with no natural goalkeeper on the bench up stepped Lewis White to go in goal for Dynamo.

Ilkeston stepped it up a gear in the second half and Troke forced a save from Lewis White on fifty eight minutes and Brown - Hill was unable to convert the rebound.

Goodson was next to test Lewis White on sixty four minutes. White punching the effort clear and Nat Watson putting the rebound wide.

Fenton was off target on sixty seven minutes but a minute later Ilkeston were three up good inter passing between Goodson and Brown - Hill saw Goodson slot home his second of the game.

Troke's final chance of the game came on seventy four minutes for Town but he was off target and a minute later he was substituted.

Shepshed deserved at least a consolation goal from this game but it wasn't to be as Karob Motshweni was off target on seventy nine minutes.

On eighty one minutes Ilkeston were given their second penalty of the game. Brown - Hill was brought down. With Troke being substituted up stepped Goodson but Lewis White pulled off a great save.

Ilkeston were to have two further chances before the end with Reid off target and Lewis White on hand once again to save from Brown - Hill.

Ilkeston's higher level experience was the difference on the day. But Shepshed could take a lot from the game and if this is the level they want to aspire to they would be all the better from their performance with two key players missing and losing their goalkeeper at half time.

Shepshed now turn attentions back to league action with the visit of current league leaders Rugby Town who have so far won three from three on Tuesday Evening at The Dovecote Stadium kick off 745pm. They then travel to Wellingborough Town on Saturday.