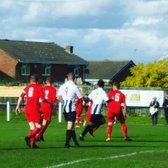 Shepshed Dynamo battled to a 2-0 win over Rothwell Corinthians and extended their lead at the top of the United Counties League.

Luke Moran scored his first goal for the club and handed the hosts a half-time lead. Harry Wakefield made certain of Shepshed's success with a second half penalty.

The visitors made a sprightly start to the match. Jordan Henson fired just wide of the post after nine minutes.

The hosts soon had the advantage. Luke Moran surged onto Wakefield's flick-on, and he guided a low finish past Bodycote to score his first goal for the club.

Shepshed sought to double their lead. Wakefield received possession and turned on a sixpence and fired marginally wide of the post.

The second half saw Rothwell threaten an equaliser. They enjoyed a succession of corners, which fortunately amounted to zilch.

Thereafter Shepshed set about putting the game beyond their opponents. Liam Hurst broke down the left and fired in an excellent cross. It evaded the waiting Wakefield.

Rothwell then finessed for themselves an opportunity out of nothing. Merson Styles flighted in an excellent ball from a free kick, and Craig Masiri fired the ball over the crossbar.

Dynamo mounted a spirited response and Wakefield elicited another good save from Bodycote with another fierce shot.

Moran then lofted a long ball over the top to Reece Morris, who saw his effort cleared off the line.

Shepshed would soon seal the victory. Morris drew yet another decent save from Bodycote before he was fouled inside the box. Wakefield sent the goalkeeper the wrong way and made certain of Dynamo's success.

Shepshed, as was the case on Tuesday, were not, perhaps, at their best, but they ground out a victory against difficult opposition, and have maintained their lead at the top of the league ahead of next weekend's trip to Pinchbeck United.