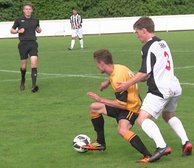 Shepshed Dynamo would have hoped getting stuck on the Motorway on route to Stourport would have been the only frustrating part of the day as their first visit to Walshe Meadow home of Stourport Swifts in 10 years turned into a day to forget.

The opening twenty minutes was even affair with both sides searching for the opener. John Griffin had the first effort with Joe Hopewell blocking his effort four minutes into the game. The game then became a midfield exchange with Shepshed gaining the upper hand Luke Edwards went close on fourteen minutes and a minute later Craig Attwood put Hopewell through but his effort as deflected for a corner, from the resulting corner Conor Bennett making his debut fired over the top.

On the sixteenth minute Stourport opened their account. The Swifts were awarded a free kick and goalkeeper Ryan Thacker had committed himself but was unable to get to the ball before Chris Morrison who headed home.

Shepshed looked for an equaliser three minutes later Edwards shot was saved by Haydn Whitcombe and on twenty three minutes Steve Chaplin's effort was deflected wide. Shepshed were looking more and more like gettIng their reward two minutes later Hopewell's shot was saved by Whitcombe. But for all their efforts the game turned again on twenty eight minutes a mix up between Jay Samedley and Chris Gray left Morrison clean through on Thacker to double his and Stourport's tally.

Three minutes later Michael Paparozzi was unlucky to reduce the arrears with Whitcombe equal to his shot and then Chaplin's effort was blocked and Papparozzi effort from the rebound was wide. Morrison who was a thorn in Shepshed's side all afternoon forced Thacker into a save . Into the last ten minutes of the half and a pinpoint ball by Gray to Keiron Davies who was unlucky not to score and then a one two between Attwood and Papparozzi saw Attwood shooting over the top . The final chance of the half fell to Morrison who also shot over the top.

The game was technically over within a minute of the restart a left side free kick and Morrison with a free header completed his hat trick.

Shepshed didn't give up and five minutes into the half Mulonga put Bennett through but Whitcombe with a point blank save denied Bennett a debut goal. A minute later and Bennett as the provider but again the Swifts keeper was alert to save from Edwards.

Shepshed did manage to reduce the arrears Lee Sutton who had replaced the injured Chaplin just before the break with a well executed free kick from the left hand side curled passed Whitcombe into the right hand corner. Shepshed went in search of a second but Whitcombe again was equal to what came his way saving from Edwards and Edwards again fired wide.

Any hope of gaining a foothold in the game was ended three minutes from time when from a Stourport corner Kevin Spencer scrambled the ball over the line to make it 4-1.