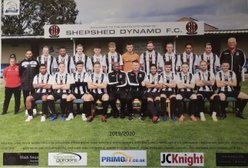 Shepshed extended their unbeaten to run to three games in the Bakers Midland Football Alliance with their second consecutive two all draw.

They came from behind this time when two down at half time and playing a full forty five minutes with ten men and no one would have argued if Shepshed would have gone on to take all three points in the second half.

On a very heavy pitch at Ratby Lane Shepshed started the better within six minutes Steve Chaplin had his first effort blocked and a minute later Rob McCormick fired wide.

From their onwards both sides struggled to come to terms with the conditions that didn't allow free flowing football Kirby's first threat flashed across the box on twelve minutes and seven minutes later Rob Mulonga's shot was blocked.

Against the run of play on twenty six minutes Elliot Shilliam's long goal kick went over Luke Pritchard on his return to the Shepshed side finding Reeve to cross to find Ryan Seal unmarked to tap in passed Tommy Allen to open the scoring. Two minutes later Kirby were unlucky not to double their score from a right sided corner Sam Wilson's header went over the top.

The first half went into injury time and after a harsh booking in the sixteenth minute Keiron Bradshaw was sent off for a rash challenge on Ryan Seal. Seal took the resultant free kick and Callum Thompson unfortunately headed passed Allen into his own net to put Kirby Muxloe two up at the break.

Kirby Muxloe came out looking to extend their lead and take advantage of the extra man in the second half within two minutes of the restart Nathaniel Mcintosh shot wide and five minutes later Brett Darby's shot went straight into Allen.

From their onwards it was in the large Shepshed's game to be won as the team worked together and pressed to reduce the arrears. On sixty one minutes Chaplin's shot was saved by Shilliam.

On the sixty ninth minute Shepshed reduced the scoreline Thompson was brought down by Elliot Pacey on the right hand side and Thompson took the resulting free kick which was met by debutant Louis Guest to head passed Shilliam. Two minutes later and the scores were level a long diagonal ball from Thompson found Mulonga down the right who was brought down in the box and Jones stepped up to put the penalty kick passed Shilliam.

Shepshed continued to press with time running out and Sam Cook's shot was saved by Shilliam. Kirby were now looking to catch the ten men on the break but their efforts were thwarted by Allen in the Shepshed goal and the final chance fell to Shepshed's Cooper -Richard but Shilliam averted the danger at his feet.

A good point for Shepshed playing a majority of the game with ten men and on adverse conditions and slightly unfortunate not to come away with all three points.