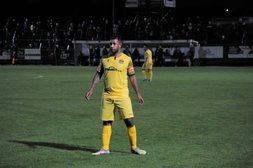 Shepshed Dynamo's first away game of the Pitching in Northern Premier League Midlands Division ended with defeat. Dynamo lost 5-1 to Halesowen Town at The Grove on Tuesday evening.

Shepshed scored first on three minutes through Matt Melbourne one of a few chances they were to have during the game.

Dynamo withstood a barrage of shots before Richard Gregory on seventeen minutes equalised. Despite constant pressure Shepshed went into half time level.

It didn't take Halesowen long to break the parity in the second half Chris Lait giving Town the lead on forty nine minutes and three minuttes later Kyle Finn added the third. The Yeltz went onto score a fourth through Harry White and substitute Jamie Molyneaux made it five just before the end.

Shepshed made several personnel and tactical changes from their draw against Carlton Town on Saturday. They got off to the perfect start. John King broke down the right hand side and found Melbourne. He rounded Dan Platt but seemed to have gone too wide, Melbourne steadied himself and beat Platt from a tight angle.

This spurred the hosts on with wave after wave of chances. Matty White with a point blank save from Gregory on five minutes. Brett Lloyd's ball across the box was met by Lait to no avail on seven minutes.

Gregory fired over on nine minutes before Liam Canavan gave Dynamo a respite from the pressure with a shot into Platt on Thirteen minutes.

Jordan Smith did well to clear from Lewis Wright on fifteen minutes. White then saved from Jack Holmes a minute later.

Platt then did well to save from Melbourne after a through ball from King on sixteen minutes.

After soaking up Halesowen's pressure the inevitable equaliser came on seventeen minutes. Finn threaded the ball through Shepshed's defence and Gregory coolly slotted passed White into the opposite corner.

Halesowen were hungry for more. Lait's effort deflected wide on eighteen minutes and Finn fired wide from the resultant corner.

Finn should have made it two on thirty one minutes but for an excellent save from White tipping his effort onto the crossbar and over.

Shepshed couldn't deal with the Yeltz well worked corner routine with Finn firing over from the corner.

Dynamo were under constant pressure. White coming to the rescue again saving from Holmes on thirty five minutes.

Holmes was on hand again on forty one minutes, White this time tipping his shot over.

Despite spending a majority of the half on the backfoot. King produced a fine save from Platt on forty four minutes.

This didn't last long into the second half. After a patient build up at the back. Lloyd found Lait who turned and fired passed White on forty nine minutes.

Any chance of Dynamo getting back in the game were extinguished on fifty two minutes. Wright's ball across the box was pulled back by Holmes and Finn fired through a number of legs and Joel Wolfe tried his hardest on the line but couldn't stop the ball from going in.

Melbourne then fired into Platt in one of few chances for Shepshed on seventy two minutes.

King then forced a save from Platt on eighty eight minutes and a minute later White was called into action again.

Halesowen were tipped by the Non League paper as one of the favoured teams in this division and on this performance they won't be far away.

The only pleasurable part of the evening for the traveling supporters was witnessing the exceptional off the ball movement from the Yeltz.

Shepshed must put this game behind them as they travel to Long Eaton United in the Emirates FA Cup on Saturday. Despite being a league below Dynamo this will be no easy task as Long Eaton have only conceded one goal in their three games so far.