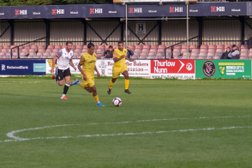 Shepshed Dynamo came away from The Bridge Road Stadium with a 3-3 draw against Cambridge City.

Despite being under early pressure Shepshed led 2-0 at half time with goals from John King and Ben Starkie.

The Lillywhites piled on the pressure in the second half and Jarid Robson reduced the deficit.

Starkie restored Dynamo's two goal lead with seven minutes to go, but Ryan Sharman pulled it back for City 3 minutes from time and Sharman equalised from the penalty spot in injury time.

Cambridge started the game brightly with Jordan Smith heading over his own bar on four minutes and Brandon Ganley saving from the resultant corner.

Mikey Davis then fired straight at Ganley on five minutes

Taylor Parr effort was then cleared off the line on nine minutes.

Nathan Olukanmi then fired into Ganley on fourteen minutes.

Cambridge thought they had took the lead on sixteen minutes with Olukanmi's header beating Ganley but he was deemed offside.

Morris put the ball through to Matt Melbourne on twenty eight minutes but George was equal to the ball.

Shepshed had stemmed the early storm Starkie's ball was deflected back by Parr into George on thirty two minutes.

Starkie was fouled was by Jordan Gent on thirty five minutes, Starkie took the free kick and Morris effort was deflected wide.

A minute later Dynamo were two up Melbourne the provider again with Starkie tapping home.

Cambridge started the second half in the same manner as the first half. Davis's free was headed wide by Parr on fifty minutes.

George then saved from Abdul Koroma on fifty seven minutes.

Ganley then pulled a superlative double save from Ryan Swift and a header destined for the goal tipped over from Ryan Ingrey on Sixty two minutes.

Jarid Robson reduced the deficit on sixty four minutes Lynas King's back header was latched onto by Robson to lift over the advancing Ganley into an empty net.

Shepshed as in the first half looked to get a stranglehold of the game Melbourne firing wide on sixty eight minutes.

Tamar Clayton then had his effort blocked by Miles Smith and Morris fired the rebound over.

Shepshed made it 3-1 on eighty three minutes Starkie was put through by Clayton and one on one with George he rounded the keeper to what looked like three points on the road.

With the officials announcing five minutes injury time The Lillywhites gained a corner. It was delivered into the box and Jordan Smith handled the ball with Sharman levelling the score from the penalty spot.

Dynamo had one final chance to win the game but Koroma's effort went into George in slow motion.

Both teams had claims for all three points. Cambridge City with their possession in the game and Shepshed leading twice with a two goal deficit.

An entertaining game and at the end of the day a valuable point away from home.

Next up for Shepshed is next Saturday with Stamford the visitors to The Dovecote Stadium.