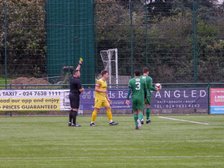 It was a disappointing afternoon for Shepshed Dynamo as they slipped to a two nil defeat away to Bedworth United in the Pitching in Northern Premier League Midlands Division.

Sam Muggleton had threatened a couple of times with his long throw ins. It came to fruition on eleven minutes when he threw into a crowded area on eleven minutes and it was turned into his own goal by Brandon Ganley to give Bedworth the lead.

Bedworth were in the ascendancy and Ganley saved from Liam Lockett's free kick on eighteen minutes.

Shepshed's task got tougher on twenty seven minutes when Niall Prenderville who had been booked on seventeen minutes was sent off with his second yellow harshly after only committing two fouls in the whole of the match.

Muggleton sent in another long throw on thirty one minutes but Kyle Barnett headed wide.

Ganley then saved from James Harrison a minute later.

Bedworth were looking to press their man advantage and Essa Sawyers had an effort blocked on thirty three minutes.

As the half came to a close John King was unlucky not to latch onto a through ball from Starkie.

Bedworth continued to provide more of the scoring options in the second half with Sawyers blocked on fifty two minutes and Elliott Parrott heading over.

Despite being down to ten men Shepshed started to impose themselves on the game. Starkie's corner was headed wide by Jadahn Harper at the far post on fifty five minutes.

Leke Shodunke off the bench then had an effort blocked on sixty six minutes.

But the hosts began to control the game again with Sawyers shot blocked by Jordan Smith on sixty eight minutes and a minute later he shot into Ganley.

Sawyers was an ever growing threat firing wide on seventy one minutes and two minutes later Muggleton fried over wide.

It was Sawyers who sealed the points for The Greenbacks on eighty three minutes Rhys Hilton threaded the ball through to him to beat Ganley.

Hilton himself fired wide on eighty five minutes and the final chance of the game fell to Reece Morris in injury time.

It was Shepshed's first league defeat in four games and after being consistently tenth in the table this result sees them drop to twelfth.

In a game which was littered with free kicks and cautions Shepshed failed to provide enough clear cut chances to warrant anything from the game.

Although Bedworth were not strikingly much better they did enough to earn all three points.

Dynamo are without a game next week and return to The Dovecote Stadium Saturday 20th November against Sutton Coldfield Town.