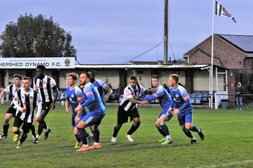 Shepshed Dynamo turned an impossible deficit at from 4-1 down at half time into an inexplicable 4-4 point although dropping a place in the Pitching in the Northern Premier League Midlands it felt more like a victory at end of the game.

Dynamo got off to the worst possible start to the game as Leo Brown latched onto a cross in the first minute to give Sutton Coldfield the lead.

The Royals were in control of the game Dahler Morrison fired over on seven minutes and Jordan Smith cleared his cross on nine minutes.

Shepshed were struggling to get into the game as has Harry Eden's corner was cleared by Shaquille O'Neill on fourteen minutes.

Dynamo had their first chance of the half on seventeen minutes Karl Demidh turning O'Neill's cross over.

Debutant Toby Ritzema was bizarrely deemed to have fouled Brown in the penalty area when he was clearly fouled by Brown on twenty two minutes and Brown dispatched the spot kick for his hat trick to make it three to The Royals.

Shepshed were given a penalty of their own on twenty six minutes Aris Christophorou handled inside the area and Matt Melbourne pulled a goal back from the spot for Dynamo.

Dynamo were beginning to grow in to the game with promise with James Sneddon firing into Lewis Gwilliams on thirty six minutes.

Brown hit the post on forty three minutes and from the rebound Callum King-Harmes in slow motion steered the ball passed Ganley and on a normal afternoon it should have been enough to see the visitors take all three points.

Shepshed came out with a fighting spirit in the second half and with a determination that the game wasn't beyond their grasp.

Melbourne's effect was saved by Gwilliams on fifty one minutes.

Denidh's deflected shot pulled Shepshed back into the game on sixty two minutes and The Royals could have regained the deficit a minute later with Ganley tipping over.

John King reduced the score to 4-3 with five minutes to go and with time running out Jack Rogers levelled the score.

From 4-1 down at half time a 4-4 draw was like a home win similar to how Cambridge City must have felt a few weeks ago.

Although dropping a place in the table a never say die attitude in the second half may stand us in good stead for the tough looking games ahead.

A second half performance quietened the traveling Sutton Coldfield Town ultras. Next weekend we travel to Belper Town.