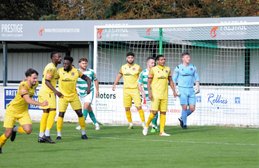 Shepshed Dynamo played in the Buildbase FA Trophy for the first time in ten years and in a game which was destined to go to penalties they exited with an eighty seventh minute winner by Sam Mulready.

Despite beating Soham earlier in the season Dynamo knew it would be a different challenge with Rangers making numerous signings and Dynamo having 7 players unavailable.

Soham had the first chance of the game on two minutes.
Dynamo showed promise on five minutes and if we had utilised this style of pace throughout the game it may have been our name in the hat for the next round, with Abdul Koroma feeding Tamar Clayton who was unfortunately offside.

Soham were always looking to press the home advantage with Brandon Ganley saving from Sam Bennett on six minutes.

Shepshed had their best chance of the half on thirty one minutes with John King's shot cleared off the line by Sam Kelly.

Rogers went close with a header on thirty eight minutes, but Dynamo took control of the latter of the half, with Finley Iron saving from Clayton on forty minutes.

Jiah Medrano then had his cross punched clear by Iron on forty two minutes and as the half when into injury time Lee Chaffey blocked Ben Starkie's effort and King fired over as the half ended goalless.

Soham started the second half strongly with a double Rogers free kick on forty eight and fifty two minutes being blocked.

Shepshed started to threaten with their pace down the flanks.

Karl Demidh fired over the top and then Starkie's effort was detected over. King"s effort went into the side netting.

With the game looking like it was going to penalties Mulready won the tie for Soham beating Ganley at the far post on eighty seven minutes.

Shepshed had little time to equalise but threatened twice with Jake Betts on his return from a pre season injury going close and Medrano hitting the bar.

It wasn't to be Shepshed's day and the priority turns back to League action next Saturday when we travel to Histon to play Cambridge City.