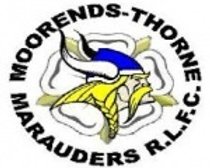 Bears pick up the league points

Sherburn overcome a tough Moorends side

Sherburn faced what should have been a straight forward home game against a side rooted to the foot of the table, with no wins from 3 matches and two of them given away without fielding a side on paper this looked a straight forward match for the home side, however with memories of last season’s record defeat against the Marauders still fairly fresh in the Bears minds no one was expecting an easy game regardless of what the early league table said.

One thing was obvious that when the game started and that was that the Bears were clearly the smaller of the two sides, still this didn’t unduly faze Sherburn as they have yet to play a side this season that fielded a smaller size than themselves, with a very young side packed with 16 & 17 year olds what they lack in size they more than make up with pace and fitness. Playing the game at speed is the Bears trump card this year and as the game started they immediately set about trying to wrestle control of the speed of the game from the visitors. However Moorends didn’t just have size on their side they were also fit and fielded a very experienced team with a number of good quality players and they weren’t prepared to give up the speed of the ruck without a fight.

Still the Bears fought hard and started to gain the upper hand good drives up field from Lewis Booth, Joel Booth and Kev Dalton saw the ball spun wide from right to left where stand-off half Sam Booth found winger Dan Bottomley who dived over in the corner for the first score of the match 7 minutes in, no conversion but the Bears were up and running with their first score of the game. Sherburn didn’t have to wait too long for the next score when the rampaging Johnboy Fenwick scored a trademark try carrying a couple of defenders over the line with him after a barn storming run from 20 metres out, this time stand in kicker Jordan Richards who was deputising for young Connor Jordan missing the game through appearing for Yorkshire Under 19’s, made no mistake slotting over the conversion to take the score to 10-0 to the home side with 15 minutes gone.

Moorends though weren’t here just to make up the numbers and with their wily hooker calling the shots they soon fashioned their own score with good work from their stand-off also, no conversion but the visitors were on the board, the game swung back and forth for the next 20 minutes with both sides battling hard to get on top, but it would be the visitors who would score again with another unconverted try again heavily involving the Marauders number 6, again though no conversion from Moorends saw the half time come with the scores locked at 10-8. The second half saw the Bears playing up the slope at Eversley Park and despite intense pressure the Bears would strike first with a great individual score from Sam Booth as he skipped and weaved his way around 4 or 5 would be tacklers to score at the side of the sticks, Richards again added the conversion to put the Bears 16-8 up. Back came Moorends with their third score of the game, good work from their hooker saw the space created for one of the big Marauders forwards to barge his way across the line, this time the conversion was added to put them right back in the hunt at 16-14.

A crucial period of the game saw the Bears desperately defending their line as with the aid of a number of penalties the visitors they played a number of back to back sets. However the Bears withstood the pressure and fought back, they made good metres from their own goal line with Jacob Scales, Mike Dalton and Nico Deville all working hard before a scintillating midfield break from Richards saw the ball swapped between several players with Sam Booth taking the final pass and diving over under the sticks, Richards added the conversion to put the Bears back 8 points clear at 22-14. Moorends though refused to go away and crafted a good score of their own and added the conversion to set the nerves jangling for the last 10 minutes of the match with the scores at 22-20. Sherburn though took control in the last minutes of the game with their superior fitness shining through, a brilliant score from Jordan Richards saw him burn all would be tacklers on a 50 metre touchline dash, no able convert the score the Bears increased their lead to 26-20, another foray into the visitors half in the dying seconds saw Sherburn seal the win with a well taken drop goal from hard working scrum half Ronnie Roebuck to see the final score finish at 27-20.

Best on the day for the Bears was JP Plant hire man of the match Sam Booth, the livewire stand-off was at his best in what at times was a fiery encounter, tackling everything that moved as well as orchestrating the lion’s share of all the Bears best moves he pulled the strings for his side all afternoon as well as scoring a brace himself. Second place went to centre come back row forward Jacob Scales who put in a series of shuddering hits as well as some bone crunching carries. Third place went to hard working prop forward Lewis Booth whose influence on the game cannot be underestimated. The Yorkshire Laser Supporters Man of the Match went to Jordan Richards who scored a great try, kicked some tricky conversions and made a nuisance of himself with ball in hand all afternoon.

The Bears next match will see them back in Pennine Cup action as they take on Beeston Broncos in the Supplementary cup this Saturday at Eversley Park with a 2pm ko.