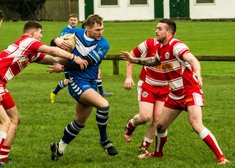 Sherburn took to the field looking to bounce back from last week’s disappointing result away at Illingworth in Halifax where defeat dumped them out of the Pennine Cup, turning their attentions back to league fixtures 3rd placed Sherburn were facing second place East Leeds. Despite the match starting in bright sunshine the sky soon clouded over and horrendous wintery conditions blew in first with freezing rain then came sleet and snow, the few brave souls who had come to watch the game huddled together whilst the players and match official played on as the temperature dropped and dropped and dropped.

These conditions were never going to produce a great spectacle of RL, the game didn’t start well for the jittery Bears, they completed their first set after receiving the kick off, before punting a deep kick down the slope into East Leeds half, the ball was returned with interest by the visitors as they broke away to score the opening try in the first two minutes, duly converted they were 6-0 to the good with the game barely underway.

Stern words from Coaches Kev Jordan and Steve Frost saw the Bears kick off with renewed determination not to show the same lack of intensity in defence that dogged their display the week before, better pressure with the ball saw a couple of drop outs from the visitors but their line defence proved up to the task and the Bears came away empty handed despite good tilts at the line from Matt Savage, Ray Boyes and Ronnie Roebuck. The Bears did however muster a good defensive set and forced an error on half way after a terrific tackle from Sam Booth, Connor Jordan and Dec Lewis saw the ball squirm from the Leeds attacker’s hands. The ball was switched to the left where second row forward Johnboy Fenwick burst through a series of tacklers to romp over the line from 35 metres out, Jordan added the extras to level the score at 6-6 with 12 minutes gone.

Sherburn started to take control of the middle of the park now, controlling the speed of the ruck with bodies in the tackle, a tactic that they failed miserably to implement the week previously, some brilliant individual tackles from Fenwick, Boyes, Booth, Lewis and Scott Towell kept East Leeds from gaining any momentum with the ball in hand, still it would take another breakaway try from Fenwick with almost a carbon copy of the first score to get past the solid East Leeds defensive line, the Cas lad burst through the line again from 35 to 40 metres out rocketing past 4 or 5 would be tacklers before steam rollering the fullback to score at the side of the posts, again Jordan tagged on the conversion to put the Bears 12-6 up with 30 minutes of the half gone.

Sherburn continued to press looking for further scores and it wouldn’t take too long to find one with Rob Culshaw proving instrumental, the versatile back slotting back into his normal position of scrum half showed deft footwork as he followed up his own grubber kick to toe poke the ball around the fullback before diving on the ball to score 10 metres in from touch, no conversion but with a 16-6 lead the Bears could be pleased with their hard work in the first half paying off with a lead at half time. The start of the second half saw the weather deteriorate still further with a full blown blizzard blowing across the pitch, this proved too much for the East Leeds number 7 who trudged back to the changing rooms claiming it was too cold to play, with no subs he left his team down to 12 men, unforgivable behaviour from an amateur rugby league player.

Still the visitors loss was the home side gain, it didn’t take long for the Bears to take control of the second half as they played up the slope at Eversley Park, jet heeled centre Jordan Richards scored his first try of the game when he cantered after a deep kick hacked the ball forwards around the hapless East Leeds fullback before diving on the loose ball to score, Jordan added the extras to put the Bears 22-6 up with 10 minutes of the half played. This seemed to spark the visitors into life and they produced a heroic effort to force themselves back into the game scoring a try after the Bears spilled the ball in the first carry of the set after receiving the kick off, duly converted East Leeds pulled the score back to 22-12.

The visitors were firmly back in the game now and capitalised on the home teams handling errors in treacherous conditions, only brilliant work at the back from returning fullback Ben Pugh as well as a wingers Dom Romans and Dan Bottomley who field the ball from a number of deft kicks with aplomb, especially 16 year old Romans whose bravery at recovering the ball then returning it with interest was especially impressive. Sherburn gradually turned the tide and wrestled control of the game back from a tiring East Leeds outfit, strong carries from Savage, Romans senior and Shaun Richardson saw the Bears making good metres up the field before Richards struck for his second score after bursting through the line following a brilliant offload from hard working loose forward Ronnie Roebuck, that was expertly fed to Richards from the probing Jordan, no conversion but that saw the Bears take the final score to 26-12.

Best for the Bears on the day was JP Plant Hire man of the match Johnboy Fenwick, the rampaging second rower proved a thorn in East Leeds side all afternoon with his barnstorming carries and brutal defence. Second place went to young winger Dom Romans who belied his tender age to put in a performance bristling with skill and confidence. Third place went to hard working young forward Declan Lewis who promoted to the front row put in a sterling performance to rack up a significant number of tackles as well as the most amount of carries of any player on the park in a Bears shirt. Supporter’s man of the match went to fullback Ben Pugh who was fantastic at the back all afternoon.

Next Saturday see’s the Bears visit Wortley as they look to take their unbeaten league run to 8 matches.