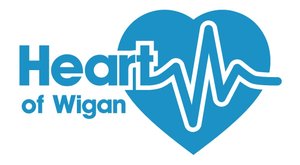 We are delighted to announce that our U13 team will be wearing the Heart of Wigan logo this season. Please read press release below from Aug 14

A major campaign has been launched in Wigan Borough to cut the number of people who die from heart-related conditions.

The “Heart of Wigan” campaign will encourage people to live healthier lives, train as many people as possible in basic life-saving skills so they can help if someone suffers a heart attack and work to improve public access to life-saving equipment such as defibrillators.

Cardiovascular disease is one of Wigan Borough’s biggest health problems. In 2012/13 there were 14,152 people diagnosed with coronary heart disease in the borough. That’s around one in 23 people. However, not everyone with the condition has been diagnosed so the figure is thought to be more like one in 20.

The campaign is being led by Wigan Council’s public health team and Councillor Damian Edwardson, who has personal experience of the impact of heart disease. Councillor Edwardson’s mother died aged 46 following a heart attack and a close friend recently passed away after suffering from heart disease.

Councillor Edwardson said: “I want people to know the risks associated with heart disease and raise awareness of some simple steps people can take to cut their chances of suffering from poor heart health.

“The Heart of Wigan campaign will also train as many people as possible in first aid skills needed to help save someone’s life if they have a heart attack. And we’re going to recruit “heart champions” who will not only be trained in life-saving skills but will also know exactly where to find equipment such as defibrillators in an emergency.

“We’re also going to work with businesses and other organisations to increase the number of defibrillators that are publicly accessible in the borough.

“This is something that’s hugely important as heart disease is a major killer in Wigan Borough and something the council takes extremely seriously. We want to save lives.”

The campaign has been backed by all members of Wigan Council who have become the first to receive training through the campaign. In what’s thought to be a first nationally, all 75 of Wigan’s councillors were offered the training. The session was held at Wigan town hall and led by qualified British Heart Foundation trainers from the council's Health Improvement team. The councillors were taught basic life-saving skills including how to save someone’s life if they have a heart attack.

Councillor Edwardson said: “Councillors from all the political parties on Wigan Council were invited and those that came to the training were very supportive of the campaign. It’s great we have recognition across the council that this is a major issue in the borough and we have to take practical steps to improve the situation.

“I know first-hand the devastating impact heart disease can have and I want to prevent people from suffering such pain.”

The training will now be offered to the public and awareness events will be held across Wigan Borough. The council is working to install defibrillators in public areas and hoping to persuade other organisations to make them available in their buildings.