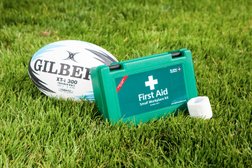 It was another frustrating afternoon for the young Shipston side at Mayo Road, as they entertained a big Cheltenham North team looking for their third win on the bounce against the Rams. It was a sunny afternoon, perfect for running rugby, and Shipston were determined to put in a performance for the faithful support. They were the manufacturers of their own downfall in the first quarter of an hour, as a series of missed tackles and loss of concentration allowed the visitors to develop an early lead without having to break into a sweat. A Cheltenham North lineout on the Shipston 5 metre line was thrown over the top, enabling their number 8 to catch and waltz over the try-line largely unopposed - The Rams defence slow to react. This converted try was followed shortly by a penalty that was calmly struck over, Cheltenham North could hardly believe their own luck as they cantered to a 10-0 lead.

Shipston eventually did wake up and, playing down the slope, managed to get a foothold in the match. The forwards upped the intensity and the work rate and a series of phases were eventually rewarded, as Jack Coupland went crashing over the line over on the far side to give the Rams their opening score. The conversion from the far touchline was sent wide.

A second try soon followed for the Rams, when the backs were awarded some quick ball. The ball was sent wide through the hands and after a mini break and offload between Matt Corby and Dan Taylor, William 'Spider' Gasson was on hand to receive a pass and charge his way over the whitewash, levelling the scores up at 10-10. The conversion was frustratingly charged down to prevent Shipston from taking the lead! With half time fast approaching The Rams lost the experience of Steve Baker, who was forced to leave the field after a late tackle (results of an x-ray confirming a dislocated and fractured hip, as well as a trapped nerve). It goes without saying that everybody in the club wishes him well with his recovery! Rather than be downbeat about the injury, it seemed to act as a catalyst for an inspiring passage of play from the home side. A clearance kick from the North fullback was gathered by Matt Corby and the Shipston counter attack took off. After some quick ball and a couple of good carries up the park from Jack Coupland and Ben Haines, Shipston were awarded a penalty in front of the sticks and this time Sam Cooper made no mistake, slotting it home to go 13-10 ahead as the half time whistle blew.

Playing up the slope, but with the breeze at their backs, Shipston would've hoped for a little more from their second half showing, but a succession of penalties kept them on the back foot for large parts. North were the first to score in the second period after the Rams defence was left short, simple hands created an overlap for their fly half to ghost over the line and dot down. The missed conversion made the score 15-13 to Cheltenham. The Rams were soon back in front however, after a series of phases and some good hands put them into a dangerous position on the Cheltenham 22 metre line. A penalty was awarded for infringements at the break down and again Sam Cooper knocked it over from near the right touchline, pushing Shipston ahead yet again 16-15.

That was to be the last of the scoring for the Rams, as the half developed into one of frustration for the home side. North scored a third try of the afternoon, capitalizing on an overlap after some Shipston players were drawn into a scuffle off the ball. The North number 8 rightly continuing on with play to dive over in the far corner. The conversion was made to give Cheltenham a 22-16 lead. Shipston showed tremendous heart and really began to take the game to the visitors and but for some more clinical handling, would surely have rounded off another couple of scores of their own. It wasn't to be however, and Cheltenham scored a further 2 penalty kicks as The Rams were penalized for infringements during their desperate attempts to salvage something from the game. Final score Shipston 16 - 28 Cheltenham North.

Although the result was disappointing, the attitude and application of the Shipston side was something to take away from the game, with bigger and better things surely round the corner for the improving side. Man of the match for me would be 'Spider' Gasson, who had another excellent game in the back row. He was supported brilliantly by the likes of Sam Treadgold and Andy Hunt, with special mention going to Mark Jervis who coped admirably during his first outing on the wing!

Next week The Rams travel to Evesham for their penultimate fixture, with kick off at 3pm.