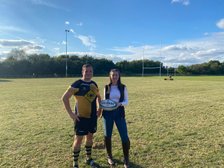 Shipston Start Season With a Win

The Rams beat High Wycombe in an entertaining encounter at Mayo Road!

Shipston got their Wadworth 6X Southern Premier league season off to a winning start on Saturday, when they welcomed High Wycombe RFC to Mayo Road. With the return of sport post COVID restrictions, the clubhouse was buzzing with anticipation as a healthy crowd made their way down to the ground to lend their support under the September sun.

Playing down the slope in the first half, Shipston got off to a poor start and found themselves two tries down within the first fifteen minutes, following some rusty, early season errors. A couple of handling errors and some poor defensive shape gifted High Wycombe a couple of early opportunities and to their credit, they were clinical enough to finish them off. The two tries for the visitors sandwiched a Rob James penalty to give the away side a 3-12 lead within the blink of an eye.

The Rams slowly began to get themselves back into the game and in particular, started to show a bit of dominance up front - with the front row of Issac Clayton, James Pither and Ben Summers putting in a strong shift in the front row. Their persistence was rewarded after half an hour, when second row Timon White picked up from the base of the ruck and crashed over for his first Shipston try (on league debut no less). The conversion from wide was missed and the score was now 8-12.

Just before half time, High Wycombe found themselves in possession on halfway and managed to manufacture an overlap out wide. Some quick hands released their winger and following some good hands. he was able to pass back inside to a support runner and claim their third try of the afternoon. The extras were not added and the two sides went in at half time with the score at 8-17.

Shipston were by no means out of the contest at the break, but they needed to knuckle down and look after possession better, creating a few more phases and working openings. They certainly did this in the second half and they came roaring back into the game!

Some strong carries from George Minogue and replacement second row Charlie Hollies-Everett got the Rams on the front foot and the crowd really began to build into the match. After a sustained period of pressure, Robbie Faulkner, returning to the side after a long stint out injured, latched on to the end of a slick move and went crashing over the line in right hand corner to make the score 13-17.

This try was followed up shortly after by a third of the day for the Rams. Faulkner this time turning provider, as he chiped the ball over the on-rushing defence for Rob James to gather and race away over the line - scraping Shipston into the lead at 18-17.

The Shipston pressure was beginning to tell and the High Wycombe defence was starting to give away penalties. James punished them twice, kicking two successfully to increase the Rams' lead to 24-17 and despite some frantic final minutes as the visitors pushed for a fourth try, this was how the game ended - Shipston victorious 24-17.

There were some excellent performances throughout the side, especially in the second half, with the likes of Timon White, Robbie Faulkner and Harry Clark all having very strong games. The MOTM this week however was awarded to Ben Summers for his tireless work in the loose and excellent scrummaging in the front row. He was awarded the accolade by Holly Kirk, representing NFU South Warwickshire who were the match ball sponsors for the day - a huge thank you to them for their support.

The Rams make the short trip over to Stow RFC on Saturday (2nd October) 3pm kick off.