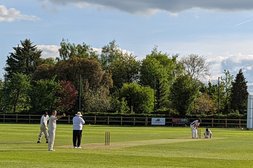 A gutsy win for a fresh looking Shire team.

Glorious Sunshine greeted the opening of the season as Shirehampton 1st XI travelled to Whitchurch for game one. Kitted out in their newly sponsored shirts, the Ones took to the field to start the game. Whitchurch got off the mark quick as openers Dom Cross and James Vaughan, two of Shires 4 debutants, showed a little early season looseness in the face of some aggressive batting. This led runs and chances, with Vaughan finding the edge on a number of occasions and Cross pushing a number of balls just passed the top of off-stick.

It was with the first changers, Ken Earl and Lewis Palmer, that Shire got the game fully under control. Earl picked up the first wicket, caught by Dave Austin at mid-on, with his very first ball, before Palmer picked up the other opener LBW. Both bowlers went on to pick up another wicket each and finished on almost identical figures; Earl ending with 8 overs, 1 maiden for 33 runs and 2 wickets with Palmer having the same for just one run less.

Cross came back for two more wicket taking spells, one caught by Dhanush Thiagaraj and the other bowled, while fellow debutant Asad Mohammad also picked up a wicket with an excellent catch in the deep from Palmer. However, a couple of fielding errors and some aggressive running let Whitchurch get to 220 with 7 down.

Having reached and beaten 200 as a team in the preseason games, hopes were high as Adam Geddes and David Austin led the team out. However, their relatively quick loss had the side on the back foot. Dhanush Thiagaraj (32 off 49) and Aiden Kee (11 off 22) were able to steady the ship, allowing a debuting Samad Rizvi to go on the attack attack, scoring 43 off 50 balls.

Dom Cross (27 off 35) held the middle of the innings together and provided a platform for Asad Mohammad and skipper John Stilwell to let off some late innings fireworks. Mohammad's crunching 34 off of 24 balls got Shire comfortably ahead of the rate, while Stilwell's equally brutal 42 of 26 saw his side to the win with an over and change to spare.

There were a number of takeaways from game one. The teams fielding left a little to be desired with a couple of miss-fields over-throws and dropped catches. Extras was Whitchurch's third top scorer, but this will naturally tighten up as we move through the season. On the positive side, chasing down over 200 is a big achievement and not something we have seen from a Shire team for a while. All our debutants, Cross, Vaughan, Mohammad and Rizvi made a positive impact on both sides of the ball, while old faithfuls Earl, Palmer, Kee, Thiagaraj and Captain Stilwell continue to prove their worth.

All in all, a very good start to the year. Up the Shire!