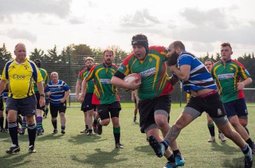 In their third and final pre league season friendly Shoots picked up a convincing victory away over Askeans with an assured performance and a dominant 2nd half.

After 2 bruising encounters against Blackheath Bandits and Gravesend Gannets respectively this fixture had been much anticipated and was being viewed as a bench mark for the relative strength of opposition between local rivals plying their trade in Kent 2 and the sides that Shoots will face in the upcoming Bishops Finger Merit Table campaign.

Playing on the all weather surface Shoots received the kick off and immediately made in roads back in to the Askean half and enjoyed much of the possession in the opening quarter but the odd mistake and missed opportunities coupled with some resolute defence kept the game scoreless until the pressure finally told when evergreen prop Felix Louisy took the ball at pace and crashed over near the posts. Fly half Rory Mitchell added the extras. 0-7.

At this point Shoots could have been 2 or 3 scores to the good but with only one try conceded Askeans were spurred on and gradually worked their way in to the Shoots 22. A couple of penalties were subsequently conceded and from 5 metres out the burly Askean No.8 barrelled over the line. Conversion missed. 5-7.

From the ensuing restart Askeans again ran the ball back in to Shoots territory eventually forcing an attacking scrum just inside the 22. The No.8 picked up from the base going blind and having avoided one tackle deftly offloaded to the left wing who dotted down near the corner. Conversion missed. 10-7.

At this time there were only a few minutes to go before half time and with no further score prior to the interval Shoots were left scratching their heads as to how they were somehow behind on the scoreboard. Nevertheless, the team regrouped; a couple of tactical and positional changes were made from the bench and the reaction was nothing other than positive.

After absorbing some initial pressure from the hosts Shoots intelligently worked their way in to good field position following a jinking break from Josh Fenn who had switched from centre to fly half. A series of forward drives around the Askean 22 saw 2nd Row Danny Snaith take the ball at pace and burst through a couple of tackles to score under the posts. Full back John Garrett added the conversion. 10-14.

This score was perhaps the most pivotal of the match and gave Shoots the belief that they could go on and win the game. Askeans were aggrieved to have fallen behind but from the restart Shoots regained possession and moved the ball quickly to wing Joe Gibson. A slow chase by Askeans meant the defence was all at sea and Gibson spotting a gap weaved his way up field from almost 70 metres out; evaded several would be tacklers and touched down under the posts. JG again added the extras and the hosts were shell shocked having conceded 2 tries in as many minutes. 10-21.

Shoots could now sense that their opponents were vulnerable and playing with added confidence entering the final quarter of the game began to exert additional pressure by keeping possession and playing the game in the Askean half.

A tiring defence began to infringe and penalties were awarded in Shoots favour, which culminated in flanker Harry White crashing over from short range. The conversion on this occasion was scored by replacement centre James King. 10-28.

From the restart Shoots were once again showing confidence with ball in hand. A couple of bullocking runs from prop Tom Dillon (who had an excellent all round game) had Askeans firmly on the back foot and set up the field position from which another assault on the opposition try line could be mounted. A few phases later and it was 2nd row Snaith who cut through the defence (selling an outrageous dummy on the way!) to score his second and Shoots fifth and final try of the afternoon. JK added the conversion from in front of the posts. FT 10-35.

This was indeed a confidence boosting victory against local neighbours and rivals in which it would be too difficult to single out any one individual. A great team performance with some good attacking intent; calmness with ball in hand and a sound defensive effort that kept Askeans scoreless in the 2nd half.

Next week sees the league season commence with what is expected to be a tough assignment away to the relative new team on the block, Swanley. KO is at 3pm.