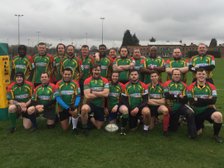 Last Saturday Shoots travelled away to Beckenham for what they knew would be a difficult and combative encounter.

Seemingly organised at the meet the South London traffic also had its say leaving little time for a proper pre match warm up.

Beckenham is always a tricky place to go and get a result but the appalling weather conditions and incredibly narrow pitch did nothing to raise Shoots spirits.

Unlike the previous few weeks the intensity from the start was missing. Shoots kicked off but immediately found themselves back in their own 22 where they remained pinned for 10 minutes. A resultant maul from a lineout saw the Beckenham pack drive over the line. The try was awarded and the conversion added. 7-0.

From the restart Beckenham again took possession and using the wind to their advantage pushed Shoots back into their own half. Whilst Shoots were keen to run from deep to try and create some tempo the conditions didn’t allow and a number of handling errors just resulted in turnover ball. The home side used one of these to their advantage and managed to put together one of the only decent back moves of the entire game when their left wing neatly cut back inside to touch down. The conversion was again successful. 14-0.

A similar pattern continued with Beckenham keeping the ball tight and using all the conditions to their advantage exerting more pressure within the Shoots 22. Another converted score through the forwards followed shortly before half time making the interval score 21-0 to the home side.

Shoots had few opportunities in the first half but were nonetheless hopeful of turning the tide in the 2nd period with the wind now at their backs. Enjoying a better supply of possession and with the more dominant scrum the Beckenham line was threatened on several occasions but Shoots just couldn’t find the finishing touch.

A frustrating afternoon that could have been so much better without the travel disruption, slow start and conditions that played right in to the hands of the home side.

The front row of Tom Dillon, Harry White and Danny Snaith all had solid games but a promising Shoots back line had no space in which to showcase their skills on a slippery day and on the narrowest it pitches.

Next Saturday is a rest week but old rivalries will be renewed on 20th October when Shoots host Erith. KO at 3.00pm.