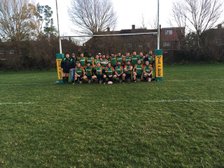 Shoots Put Bromley To The Sword

Last Saturday Shoots put together back to back league victories for the first time this season with a comprehensive victory over Bromley 2s, again avenging an earlier season defeat when the opposition were allowed a fast start.

Feeling confident after last weeks win at Dartfordians, Shoots set off at a pace after the Bromley kick off didn’t travel 10 metres. Opting for the scrum the solid platform, off which the Shoots backs could operate all afternoon was evident straight away giving scrum half and skipper Michael Smith much clean ball to distribute.

Shoots immediately broke right and advanced in to Bromley territory and several phases later the ball was in the hands of 2nd row Danny Snaith galloping down the wing, who had an all round fantastic match demonstrating some ball skills of which the Harlem Globetrotters would be proud! Cutting inside towards the posts and with 3 defenders hanging off him Snaith popped an overhead pass to on rushing full back Linval Antonio to touch down. Fly half John Garrett converted to put Shoots 7-0 up after just 5 minutes.

The restart kick from Bromley this time around was much more precise although was well gathered by flanker Josh Spanyol to carry strongly back towards half way. Shoots continued to work the phases using short pop passes off the rucks to punch holes in the opposition defence. Camped in the Bromley 22 Snaith’s athleticism was again to the fore as he took the ball at pace and dummied several Bromley defenders to score by the posts. The extras were added by Garrett for a 14-0 lead.

All the momentum was now with the home side and from the restart another strong carry this time by returning No.8 Harry White took Shoots back into Bromley territory. After a patient build up and industrious work at the breakdown by flanker Joe O’Dea and with the defence having been moved from side to side centre Tom Jenks went on a direct run up the middle brushing off would be tacklers to touch down. 2 more points for Garrett and Shoots had a 21-0 lead with only a quarter of the match gone.

This finally seemed to spur Bromley in to life and whilst their defence had been found wanting, when they had the ball they looked like they could do some damage in attack with decent possession. For the first time in the match Bromley also forced Shoots back in to their 22 and the concession of some soft penalties. The pressure eventually told with a converted try and Bromley were on the board. 21-7.

Conceding this try also gave Shoots renewed focus and within minutes they had hit straight back. Some well worked phases again put the rampaging Snaith into space and the Bromley defence was again found wanting as he crashed over for his 2nd try of the match. Garrett was again successful from the tee. 28-7.

Back in the ascendancy and with time still on the first half clock Shoots were determined not to concede again and also to further extend the lead. Space was beginning to open up and enjoying plentiful possession Shoots intention now was to really stretch their opponents, which they did successfully from half way as Joe Gibson now deployed from wing to full back received a flat pass to put him through but with 2 covering defenders still to beat. Both were turned inside out by mesmerising foot work as Gibson raced to the corner for a 5th try of the half. Garrett’s conversion attempt from out wide was well struck but fell tantalisingly short. HT 33-7.

Determined to press on after half time with a 4 score cushion Shoots became a little sloppy trying to play from deep when putting boot to ball would perhaps have been more effective. Consequently, it was a reenergised Bromley who got the upper hand in the 3rd quarter driven on by their lively scrum half who sought to rally his team. He was subsequently rewarded with the next try of the match from a sniping run inside the Shoots 22. A successful conversion closed the gap to 33-14.

However, as in the first half the Shoots response was measured and swift. Direct running and quickly recycled ball released the backs deep into Bromley territory and outside centre Josh Fenn burst through to score. Another successful conversion for Garrett made the score 40-14.

Whilst no further scoring additions were made continued Shoots pressure saw mobile loose head prop Tom Gadsby released into space outside the 22. On another day momentum might have got him to the line but sadly it wasn’t to be as he was hauled down with a few metres to spare.

Unfortunately, a couple of Bromley players suffered injuries in the process. Although not serious but with no bench to call upon and with the game no longer in the balance the referee ended proceedings slightly early. Nonetheless, this was a ruthless performance from Shoots particularly in the first half built on a team game plan and with the work put in at training paying off.

There is a break next Saturday but the week after Shoots 1st XV are away to Alleynians, which will be a tough encounter, but now playing with a real sense of purpose Shoots will travel with confidence and believing that victory is far from impossible given the right preparation and mind set.