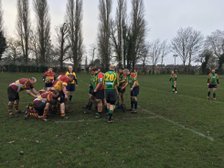 Shoots March On Against Dartfordians Saints

After a couple of near misses in recent weeks Shoots in what is a very competitive league got the much deserved victory they had been seeking.

Good preparation at training was put into practice on the pitch and the carefully thought out game plan put into action.

Right from the kick off the ball was gathered by hooker Jake Trathern who carried strongly back into the opposition half only for possession to be spilled. Darts immediately hit back and after the concession of a couple of soft penalties were camped in the Shoots 22. The defence was strong and organised and Darts were kept at bay for the best part of 15 minutes until an overlap was well worked on the left. Conversion missed. 5-0.

Refusing to panic Shoots from the restart pressurised Darts back in to their own half forcing some handing errors. With good possession the phases were worked and a penalty was awarded for a high tackle. Fly half John Garrett calmly slotted the kick from 25 metres out and Shoots were up and running. 5-3.

The restart was again taken back into Darts territory where Shoots remained with forwards and backs combining well and looking after possession. After a concerted period of pressure and with much of the defence sucked in crisp passing by the backs released full back Linval Antonio into space who then dummied his opposite number to touch down under the posts. Garrett converted and Shoots were in front at 10-5 and with a lead that was never to be relinquished.

With half an hour gone and Shoots now seemingly dictating proceedings what was to follow was quite incredible. Darts were once again in the Shoots 22 and dominating the scrum. The ball was quickly heeled back and with Shoots looking to clear their lines Antonio shaped to kick but then went on a quite sensational mesmeric run evading would be tacklers at will to score at the other end. Garrett again converted and a stunned Darts were 17-5 adrift.

Darts response though was quite impressive as they searched to close the gap before the half was out and would have scored on the stroke of the half time whistle from a push over try but the ball squirted out and it was Shoots who grounded the ball first to deny the home team. HT 5-17.

Shoots started the 2nd half in a controlled fashion not taking any unnecessary risks but looking to increase their lead. After several phases the ball was moved wide but another high tackle saw penalty advantage. The attack fizzled out but Garrett slotted the 3 points from the tee to create a 3 score cushion. 5-20.

From this point on much of the game was played between the 22s as territory and possession ebbed and flowed until Darts got a foothold near the try line after Shoots had been reduced to 14 men following a yellow card for a technical infringement.

Waves of attack by Darts were repelled with some great hits in particular by prop Taylor Buckingham and flanker Joe O’Dea and the resistance was only broken when the home team managed to control another 5 metre scrum for the touchdown. Conversion missed. 10-20.

Now into the final 10 minutes and Shoots were back up to a full compliment and looking to spread play in search of a decisive score. Several controlled phases once again saw centre Joe Gibson released down the middle sidestepping the floundering defence to touch down under the posts. Garrett again adding the extras for a 100% return with the boot. 10-27.

With little more than 5 minutes remaining and the result all but settled Darts tried to rally but Shoots tails were up and nothing was coming through the green defensive wall. Final score 10-27.

This was a much needed and deserved victory for Shoots built on a solid all round team performance. Difficult to single out any one individual but a combination of good line speed in defence and strong running in attack combined for a brand of pragmatic rugby that Shoots can hopefully take forward with renewed confidence into their next fixture against Bromley 2s.