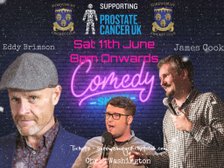 From 8pm at London Road

The club will be holding a comedy evening at the club on Saturday 11th June from 8pm onwards, the evening will feature a 'Compare and two stand ups'. The initial plan is to host the event in the clubhouse which will limit tickets to 65 people, in the event that the weather is looking promising we will host it outside as we did in 2020.

The evening will be compered by James Cook , James is a professional stand up comedian. You may have seen him opening for ‘Mock The Week’s’ Gary Delaney or ‘The Chase’s’ Paul Sinha on their national tours; at clubs such as The Glee, Komedia or Manfords, or at the Edinburgh Fringe where he’s performed 15 successful full run shows.

Rising star Chris Washington will also be performing, Chris is taking the comedy industry and audiences alike by storm. With bags of Northern charm, he had a hugely successful debut run at the 2017 Edinburgh Fringe Festival, during which he received a sparkling nomination for the coveted Edinburgh Comedy Award for Best Newcomer with his solo stand-up hour Dream Big (Within Reason).

Eddy Brimson will headline the evening, since turning to comedy in 1999, Eddy has well and truly established himself on the live circuit and is regarded by some as one of the leading headline comics in British comedy and the world. His career has even taken him from Dundee to Dubai!