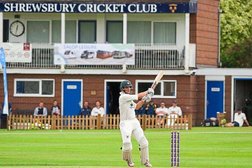 A fantastic weekend for all four of the clubs senior playing sides with all teams recording wins.

The First Xl enjoyed a close win away at Knowle & Dorridge after bowling Knowle out of 97 well led by George Garrett with the ball who claimed his second five wicket haul of the season taking 5-19, they made hard work of the small chase loosing wickets at regular intivals but Matt Swift led the way with a very composed 47* to see the side home.

The Second Xl took on local Neighbours Shelton in the match dubbed as the "Kev Bland Derby". After winning the toss and choosing to bat the seconds scored 225-7 from their 45 overs, Harry Wassell free from School commitments for the first time this year led the way with 54, Llyr Thomas, Adam Keen and Richard Williams chipped in with scores of 43.32 and 34 respectively, in reply Shelton looked well set before Dan Manders and Lewis Evans put the halt on matters, Lewis ended with 4-33 from his 9 overs Dan 3-22 and Tom Somerville came on late to clean up the tail taking 3-14.

A much strengthened third team claimed their first win of the season beating St Georges Third Xl by a 162 runs, key contributions with the bat from Robbie Johnson 59, Josh Wharton 65 and Mikil Jhain 41 led the way as the thirds racked up 285-7 from their 40 overs, in reply St Georges never really got going and were all out for 123, Mikil completed a fine all round performance taking 5-21 there was also three wickets for Tom Atkins who continued his fine season so far.

The Fourth Xl got back to winning ways chasing down the 175 runs needed for victory for the loss of only Three wickets, an unbeaten 56 from Tim Stone carried the side home well supported by Matthew Wear with 41 and Michael Walker with 34. The wickets in Wem's innings were all shared around with Tom Atkins, Matthew Wear, Hugh Curteis and Jamie Walsh all taking two wickets each.

Links to the respective scorecards can be found following the link below,